One of Khloe Kardashian‘s superfans just had a night to remember.

The 34-year-old “Keeping Up With The Kardashians” reality star accompanied fan Narbeh to his Hoover High School prom. The student shared photos and video from their time together on his social media accounts on Friday.

“Took @khloekardashian as my date to prom… so many more photos to come. I’m feeling over the moon ❤️ *the sign is a joke! It’s a high school prom there would never be an open bar 😂*,” he wrote on Friday, alongside a photobooth pic from the event. In the pic, Kardashian looks stunning and wears a black, long-sleeve, body-hugging dress with her long blonde hair in a slick ponytail. Her date matched her in a black suit.

“Ohhh wait…. y’all didn’t know i pulled up with koko as my prom date 🥰🤪 @khloekardashian,” he wrote in another post.

Took @khloekardashian as my date to prom… so many more photos to come. I’m feeling over the moon ❤️ *the sign is a joke! It’s a high school prom there would never be an open bar 😂*

Narbeh also took to Instagram Story to share videos of him and Kardashian on their way to the event.

“We’re going to prom,” she says in the clip. 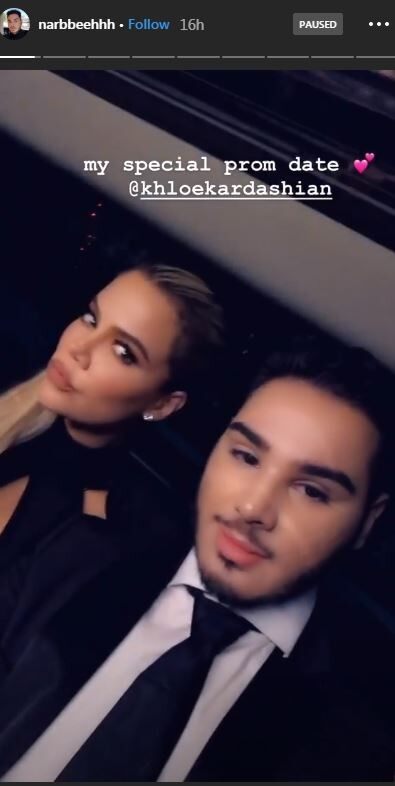 This isn’t the first time that Kardashian has been asked to prom by a fan. Back in 2017, the Good American designer was invited to attend a school dance by David LeCours. She was kind enough to respond to his brave request, tweeting, “David!!! Why are you the cutest?!?!?! I am seeing if I can go! I won’t know for a few weeks though. You are so bomb for this video!!” she wrote, before the two engaged in a back and forth.

Meanwhile, when they aren’t attending school dances, both Jenner and Kardashian are spending time with their adorable daughters. This week, both moms shared photos of True Thompson and Stormi Webster soaking up the sun.

For more on the Kardashian-Jenner family, watch below.