Shania Twain On Her New Las Vegas Residency: ‘I Can’t Wait To Get Back’

Speaking with ET Canada’s Cheryl Hickey, the Canadian Queen of Country Pop reveals she is back with her new show “Shania Twain Let’s Go! The Residency” at the Zappos Theater inside Planet Hollywood Resort & Casino in Las Vegas.

“It’s a big deal!” the five-time Grammy Award winner says of her new residency, which will open in December of this year with dates through June 2020. “I can’t wait to get back, Vegas! I really love it there.” 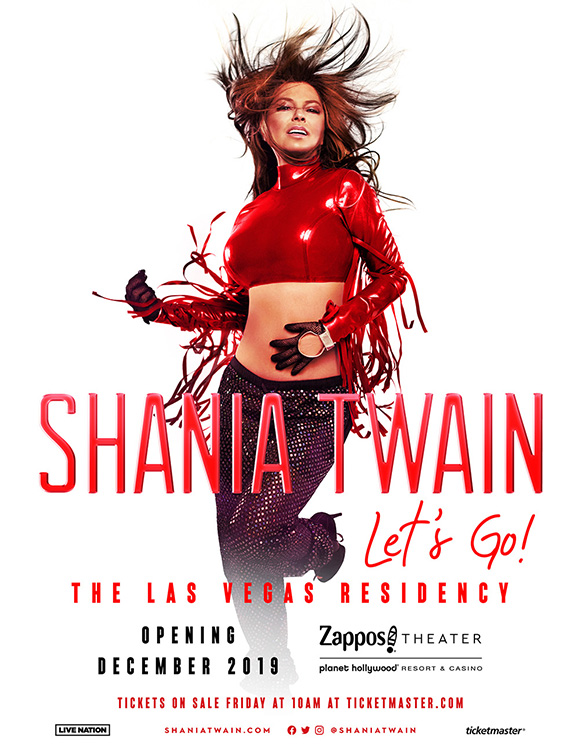 Following an eight-year bout with Lyme Disease, Twain headlined a show-stopping two-year Las Vegas residency in 2012 and launched her comeback “Rock This Country” tour in 2015.

Looking towards another Canadian music queen, Celine Dion, who recently ended her Las Vegas residency on June 8, the 28-time CCMA Award winner says she got “teary-eyed” watching her last show.

“Celine has been such a constant figure in Las Vegas and I’m so proud of her as a Canadian to have dominated the stage in Las Vegas as the longest-standing female ever,” Twain explains. “So I had to be there and see that final show.”

Teasing her new residency, Twain, who also contends she is “basically directing the production,” promises that fans will hear new music at her show.

Related: Shania Twain Tells The Story Of How She Peed Herself On Stage (And How She Covered It Up!)

“I am working on new music. I’m very excited,” she says, adding that she still, however, plans to “focus a lot on the classics.”

Meanwhile, Twain has remained busy, taking her shot at making it big on the silver screen alongside “Riverdale” star KJ Apa in the upcoming true-life story “I Still Believe”, hitting theatres in March 2020.

Despite Twain admitting that Apa pranked her “twice in a row” on set, the singer says she loved the change of pace.

“I love the environment,” she explains. “It’s so much bigger than doing a music video, for example. It’s less intense because music videos are a real sprint and movie-making is definitely more of a marathon.”

Tickets for Twain’s new Las Vegas residency will go on sale Friday, June 21, at 1:00 p.m. ET with $1 a ticket donated to Shania Kids Can.