Donald Trump fired off another racist tweetstorm over the weekend, and celebs are calling him out.

The U.S. president targeted four Democratic congresswomen of colour, saying they should “go back” to their countries of origin. Three of the four women in question were, in fact, born in America. Chris Evans slammed Trump for the tweet, calling it “hateful and racist.”

RELATED: Stephen King Says Donald Trump’s Presidency Is ‘Scarier’ Than Any Of His Horror Novels

This is racist, Biff.

The only thing worse than actually being hateful and racist, is casually wielding hate and racism to activate your base in an unrelenting, painfully transparent, and crushingly on-brand effort to soothe your only true devotion: feeding your insatiable ego. https://t.co/WfU1uUp9Ya

1. So first this clown attempts some back-breaking gymnastics to reframe Biff’s comments as ‘he didn’t mean go back to your country, he meant go back to your city’(horseshit), then he immediately follows it with a ‘love it or leave it’ defense which 100% means go to… https://t.co/zLrw1UtBJh

3….the president if he openly stated he were racist.

This obsequious dunce should have no place in politics.

PS remember all those times Biff told WHITE politicians to ‘go back to their country of origin’? 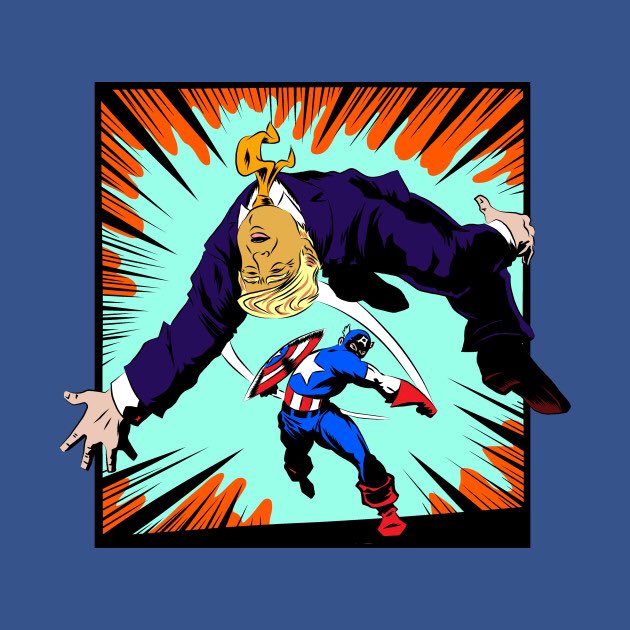 I’m dead ass convinced this idiot racist could kill someone on Twitter live in the WH west wing & u guys would be like “when he kills someone he reaffirms his message of division. We have to work together to reflect BLAH’
CALL 4 IMPEACHMENT Speaker Pelosi🗣Stop dragging this OUT https://t.co/GLu2SbMr8l

Director Rob Reiner said that “it is unarguable” that Trump is racist.

It is unarguable, Donald Trump is a racist. If you support him you are supporting racism. At this crucial time in the struggle for the soul of our nation, we all must choose. Either embrace his hatred or fight to overcome original sin. Humanity hangs in the balance.

Our #RacistInChief just told four American Congresswomen “go back to their countries…” Immigrants & their children are the heart of our country. I am proud to be #MadeByImmigrants @realDonaldTrump racist rhetoric only makes me fight harder for all. #FirstGenerationAmerican pic.twitter.com/Oh4lEDUf65

RELATED: Arnold Schwarzeneggar Claps Back At Donald Trump’s Weird Claim That ‘He Died’

Meanwhile, “When They See Us” director Ava DuVernay posted a message in support of the four congresswomen.

Saluting these women. Stay pushing. Stay shining. Stay working. Stay a pain in the ass of the #RacistInChief and all his co-horts. Stay true to who you are. Stay safe. Stay together. Stay making us proud. #FourQueens pic.twitter.com/jkcXe6Z96F

Arnold Schwarzenegger issued a statement to Politico about Trump’s tweet.

“I’m disappointed in this weekend’s untrue, unfair, and un-American attack,’’ Schwarzenegger said. “It is hateful, it is crude, and it is divisive. America has always been about where you are going, not where you come from. That’s what drew me and millions of other proud, contributing Americans to the greatest country in the world to realize our dreams.”

The former governor of California added, “President Trump, if you stood in the Rose Garden and broke down their policies for an hour, the country wouldn’t be having this conversation right now. At some point, you have to dial down Donald and dial-up President Trump. I know it isn’t easy, but the job you hold is bigger than you. It is bigger than any man or woman. The American people put great trust in you to serve, and it is time to rise to their trust instead of dragging them down and tearing them apart.”

Stephen Colbert then mentioned the whole thing on “The Late Show”, telling viewers: “It is insulting to these women to even have to defend them from these ridiculous racist accusations, and that’s the problem. Even touching on Trump’s obvious racism gets it on you. Also a fair amount of bronzer.”

TONIGHT: We're back from our break but Trump hasn't taken any time off from his role as Racist-In-Chief. #LSSC pic.twitter.com/oBJTilprbm

Jimmy Kimmel also poked fun at the president on his show, playing Trump’s speech in which he said the women in question could leave the country at any time.

Kimmel joked that Trump’s wife Melania would now be running for the airport.