Jonathan Knight and ex-girlfriend Tiffany sent audience members into a frenzy after adorably sharing a kiss on stage during the final night of New Kids on the Block’s Mixtape Tour in Ft. Lauderdale, Florida, on Sunday night.

Just weeks after the singers opened up to ET about going from teen sweethearts in the ’80s to 30 years of solid friendship, Knight hit the stage to present Tiffany with a bunch of flowers during closing night of the tour, which featured a fun mixtape-style lineup of New Kids on the Block, Tiffany, Debbie Gibson, Naughty by Nature and Salt-N-Pepa.

“I love him so very much — always have, always will. I love all these boys — NKOTB, Donnie Wahlberg, Joe Mac, Jordan Knight, Danny Wood and Jonathan Knight,” Tiffany told the crowd, before giving Knight a kiss as fans cheered in delight. “I’m so proud of them for being them, first of all. For caring about all of you guys for over 30 years.”

“They walked into my dressing room and who would have known…” she continued, referring to the summer of 1989, during which a then-relatively unknown New Kids on the Block performed an impromptu audition in 16-year-old Tiffany’s New York dressing room, subsequently landing a career-boosting gig opening for the ’80s pop icon on tour.

“I think, on this tour, I learned the most amazing lesson — I gave them a chance and look what they gave back to me,” Tiffany continued, breaking down with emotion while Knight, 50, also wiped tears from his eyes. “They gave me all of you.”

Overcome with her feelings, Tiffany, 47, continued to express her gratitude to the Massachusetts boy band from under Knight’s arms as he embraced her.

“I feel very humbled,” continued the singer, who will return to the stage with her 40-date Pieces of Me theatre tour later this year. “All the good things they’ve done over the years, so many wonderful memories you guys have shared and I’m forever grateful to be a part of them. I love you so very much.”

The “I Think We’re Alone Now” singer also gave a shout-out to tour mastermind Wahlberg for bringing her on board and “making these special moments for me.”

The deep emotion between Knight and Tiffany isn’t surprising, given their long history together. In an exclusive interview with ET in June, the pair explained how they bonded over pizza and showbiz stories on the tour bus before Knight “fell in love with her soul.”

“We were both experiencing the same things and I had never had anyone besides the guys experience those things with me,” explained Knight, whose next showbiz project is HGTV’s “Farmhouse Fixer” series. “She helped ground me and it was a good escape from the rigours of touring.”

After around two years together, the couple drifted apart due to struggling to find time together once their joint touring days were over. Meanwhile, Knight was grappling with his sexual identity.

“In the beginning, it didn’t affect our relationship, but I think as I got older and was able to have more self-realization, that was the hard part towards the end of our relationship,” shared Knight, who has since found love with partner Harley Rodriguez, whom he brought onto stage at the end of the concert. “Coming to terms with that, even though it was a good thing, was difficult. I really felt like I was betraying her, so that was hard and caused a lot of guilt.”

Three decades later, Knight and Tiffany couldn’t have been more thrilled to be back on tour together — this time, with Rodriguez, who happily watched their sweet moment unfold on Sunday, describing it as “one of the best moments of the night.” 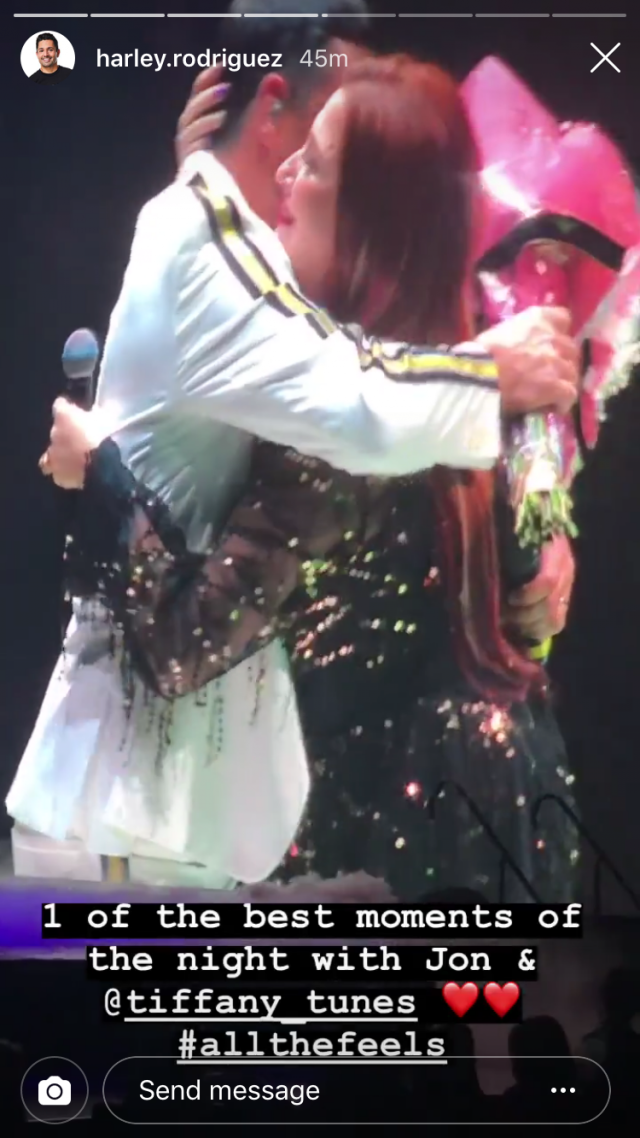 Knight wasn’t the only New Kid on the Block pulling off epic surprise moments on stage.

Wahlberg also celebrated the final night of the tour with “600,000” spelled out in giant balloons, in honour of the number of tickets sold during the North American run.

“I’m certain that I gave away 100,000 comped tickets too!” he wrote on a clip posted on his Instagram Stories.

The “Blue Bloods” star also teased fans with a sexy shirtless stage snap while contemplating the “deep, heartfelt and emotional” tour, promising to share more of his thoughts later.

Deep, heartfelt and emotional #MixTapeTour thoughts (and reflections) in my next post. Hopefully this little gem will hold you over til then. #loveeternal ❤️🙏🏼

It wasn’t just at the concert that emotions were running high for the group.

It was Starr, along with his friend Mary Alford, who formed the group on the back of his success with New Edition, and who also helped them create some of their biggest hits in his makeshift home studio — like the 1989 ballad, “I’ll Be Loving You Forever.”

“Every now and then, Maurice would pop up out of the blue with a song,” Wahlberg recently told ET. “He would say, ‘We’re going to meet Friday night and record song A,’ then he would show up randomly and go, ‘No, we’re doing song B. I got a new song.’ ‘I’ll Be Loving You (Forever)’ was one of those songs — he just came out of nowhere with it, saying, ‘I got a hit record, we’ve got to move onto it right away.’ Whenever those strokes of genius happened, we went along with it. It sounded like one of those epic ballads that becomes number one on the charts.”

“To be able to sing a song like that and know that everybody knows it and it went to number one is special,” Knight added of still getting to belt out the swoony song in front of thousands every night on the Mixtape Tour. “To have a song like that and be able to carry that into my teenage and adult life … it’s like everything else is icing on the cake. I look back and I’m like, ‘That’s all I need — just to be able sing that one song.'”

See more on the “Boys in the Band” singers below.