Selena Gomez was the ultimate maid of honour!

The 26-year-old singer had a night to remember at her cousin Priscilla DeLeon’s wedding on Friday night. Gomez looked stunning in an elegant, black, off-the-shoulder gown that featured a thigh-high slit. Her brunette tresses were curled and parted down the middle, and her makeup consisted of a smoky-brown eye, bronzer and a nude lip.

The bridal party, all donning the same chic bridesmaid’s dress, couldn’t help but post photos from the wedding ceremony as well as cute group shots and photo-booth snaps. The “I Can’t Get Enough” singer appeared to be having a blast with the rest of the bridesmaids.

my cowboy and my princess 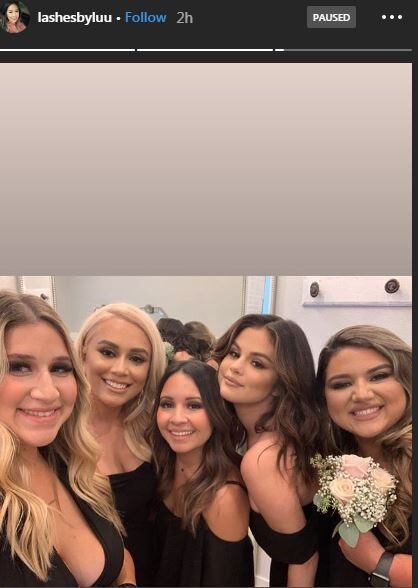 At the reception, Gomez fulfilled her MOH duties by giving a heartwarming speech dedicated to her cousin and her cousin’s new husband, Jay Cosme.

“You taught me to be strong,” Gomez can be heard saying in a video posted online by a fan. “I pray for you. You’re beautiful. … I love you.”

Gomez had been part of DeLeon’s entire wedding process, even surprising the then-bride-to-be with her “dream” wedding dress. In December of 2017, the former Disney Channel star headed back to her home state of Texas for her cousin’s bridal shower and joined the bridal party for a dress fitting.

“When your maid of [honour] makes your dream dress a reality and surprises you with it!” DeLeon captioned a sweet video of herself and Gomez posing with a sign reading, “I said yes to the dress.”

When your maid of honor makes your dream dress a reality and surprises you with it!

Earlier this month, Gomez threw her cousin a bachelorette party in Punta Mita, Mexico. In one shot posted on DeLeon’s Instagram, Gomez and her cousin are giggling as the actress sports a purple-and-orange mididress with a high slit.

“I wouldn’t want anyone else standing next to me at the alter [sic] (even the two pregnant ones that couldn’t attend),” DeLeon captioned the pics. “My maid of [honour] really showed out this weekend and threw me the bachelorette party of my dreams. I am forever grateful.”

& I wouldn’t want anyone else standing next to me at the alter (even the two pregnant ones that couldn’t attend) My maid of honor really showed out this weekend and threw me the bachelorette party of my dreams. I am forever grateful.

When not helping DeLeon with her wedding festivities, Gomez had been busy working on her film, “The Dead Don’t Die”. She also told ET last month that new music is on the way.

Watch below to hear what she shared.