Sam Claflin and Laura Haddock are calling it quits.

The couple has decided to separate after six years of marriage, Claflin announced on Instagram on Monday.

“Laura and I have decided to legally separate. We will move forward with nothing but love, friendship and a deep respect for one another, whilst we continue to raise our family together,” he said in a statement written in white text on a red background, posted to his Instagram Story.

“We won’t be commenting on this further. Thank you in advance for your support and respecting our privacy at this time,” Claflin continued, signing the post, “Both of us x.” 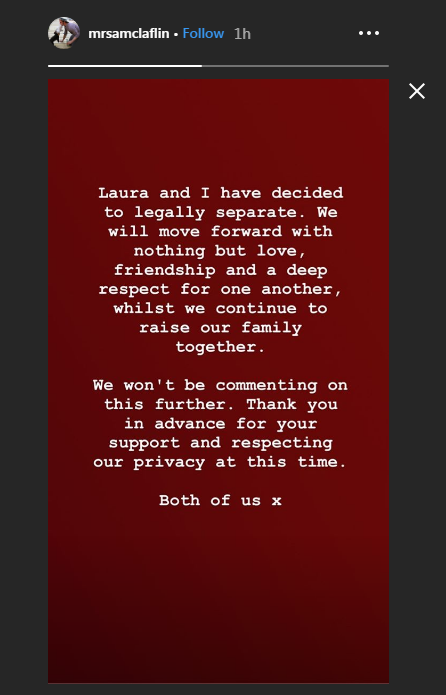 Claflin and Haddock, both 33, met during an audition for the 2011 film, “My Week With Marilyn”. They married in July 2013 and welcomed their first child, a son, in 2015. They announced the birth of their daughter in February 2018.

The actors remained private about their romance over the course of their relationship. See more on Claflin in the video below.

Sam Claflin Opens Up About Experiencing Body Shaming on Set: ‘I Felt Like a Piece of Meat’

Sam Claflin Speaks Out Against Getting Photoshop Treatment, Jokes He Has a Dad Bod