Vonn, Gretzky and Wozniacki Cheer On Boyfriends At The Masters

Tiger Woods is in a good position to win his 15th major, Rory McIlroy seems to have rebounded from the mistakes that plagued him on day one, and Dustin Johnson really has his sights set on that green jacket. Despite the fairway drives and sunken putts, many Masters fans seem more excited about the blonde bombshells following their main squeezes around Augusta National.

Tiger’s new girlfriend, Lindsey Vonn is leading her own board. The New York Daily News named her first on their blondes on parade Hottest Wives and Girlfriends in Golf, while others can’t take their eyes off Dustin’s loyal tank top-wearing fan, Paulina Gretzky.

Paulina is turning heads, vamping for the gallery during the par 3 competition that kicked off Masters week. Clad in a low-cut top, heads swivelled more than the clubs as Dustin’s most loyal fan cheered him on from the first tee.

Not to be outdone by either, Caroline Wozniacki, a 22-year-old professional tennis player, donned the traditional white caddie’s jumpsuit to accompany her boyfriend Rory during the annual event where family and friends tote the luggage and tend the pins for PGA Tour legends and those who want to be. 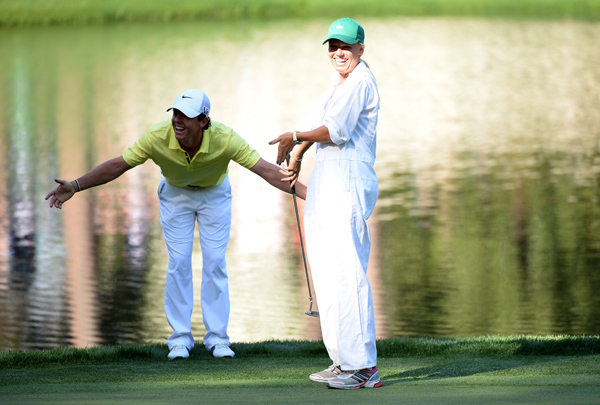 Proving that she’s a lot better with a tennis racquet then a golf club, Caroline graced the crowd with a moment of humility before getting a high five and a tight squeeze from her main man.  Watch below!

As the tournament unfolds, it’ll be interesting to see if having their ladies watch from the side lines will help, or hinder, their play. Who do you think will be wearing the green jacket on Sunday?