Felicity Huffman Has Been Sentenced To 2 Weeks In Prison In College Bribery Scandal, Saying: ‘I Will Accept Whatever Punishment You Give Me’

Actress Felicity Huffman has been sentenced for her involvement in the massive college admissions scandal.

U.S. District Judge Indira Talwani has sentenced Huffman to two weeks in prison, a $30,000 fine, plus 250 hours of community service and one year of supervised release.

Prior to sentencing, the judge said Huffman knew what she did was wrong.

“She knew it was a fraud,” she said. “It was not an impulsive act.”

The former Desperate Housewives star appeared on Friday in Boston’s federal court after pleading guilty to a single count of conspiracy and fraud in May. She is the first parent to be sentenced among the 34 people charged in the bribery admissions scheme.

Huffman took the stand Friday afternoon, telling the judge “I am deeply ashamed of what I have done. At the end of the day I had a choice to make. I could have said ‘no.’”

“I take full responsibility,” she added. “I will accept whatever punishment you give me.” 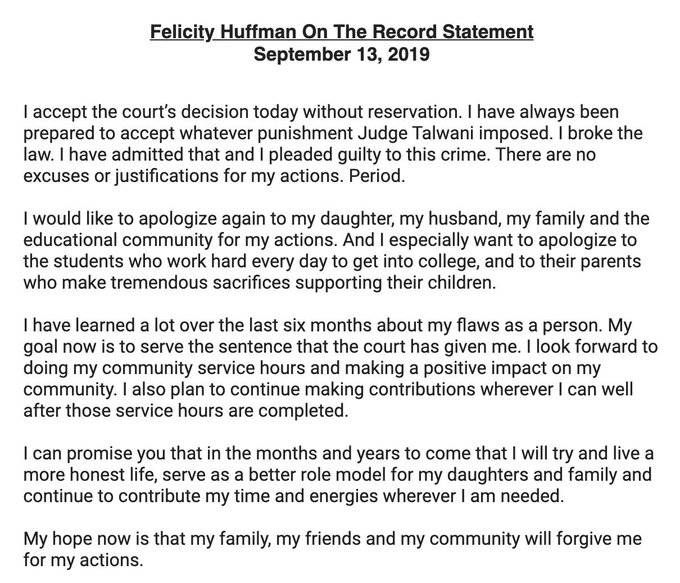 Federal prosecutors accuse the individuals of engaging in activities that involved cheating on college entrance exams and paying US$25 million in bribes to secure admission for their children at well-known universities.

Huffman, who is married to actor William H. Macy, was accused of making a $15,000 contribution to California college admissions consultant William (Rick) Singer’s foundation in exchange for having an associate of Singer’s secretly correct her daughter’s answers on an SAT college entrance exam in 2017 at a test centre that prosecutors say Singer controlled.

The case is seen as an indicator of what’s to come for others charged in the case. Over the next two months, nearly a dozen other parents are scheduled to be sentenced after pleading guilty. A total of 15 parents have pleaded guilty, while 19 are fighting the charges.

Huffman’s legal team argues that she was only a “customer” in a broader scheme orchestrated by others. In past cases of academic fraud, they said, only the ringleaders have gone to prison.

Huffman released a statement in April saying she was “pleading guilty to the charge brought against me by the United States Attorney’s Office.”

“I am in full acceptance of my guilt and with deep regret and shame over what I have done,” the statement continued. “I accept full responsibility for my actions and will accept the consequences that stem from those actions. I am ashamed of the pain I have caused my daughter, my family, my friends, my colleagues and the educational community.

“I want to apologize to them and, especially, to the students who work hard every day to get into college and to their parents, who make tremendous sacrifices to support their children and do so honestly. My daughter knew absolutely nothing about my actions, and in my misguided and profoundly wrong way, I have betrayed her,” the statement read. “This transgression toward her and the public I will carry for the rest of my life. My desire to help my daughter is no excuse to break the law or engage in dishonesty.”

Among those fighting the charges are actor Lori Loughlin and her fashion designer husband, Mossimo Giannulli, both of whom are accused of paying to get their two daughters admitted to the University of Southern California as fake athletes.

— With files from ET Canada, The Associated Press and Global News’ Katie Scott