We finally have a better idea of what Vince Gilligan has cooked up for his “Breaking Bad” follow-up, now that Netflix has released a new trailer for the Jesse Pinkman-centric film, “El Camino: A Breaking Bad Movie”.

Aaron Paul is back as Jesse and on the lam following the events of the AMC series. “Breaking Bad” ended with Walter White (Bryan Cranston) dying on the floor of a meth lab and Jesse speeding away from the neo-Nazi compound where he was being held captive. Now, Jesse must wrestle with his past as he looks to his future.

In the minute-long teaser, the camera pans across a deserted field seemingly in the middle of nowhere until it lands on the titular “El Camino”. We see a cigarette being lit by Jesse, who is sitting in the driver’s seat, as the radio flicks over to a news report about a grisly homicide that left nine men dead from multiple gunshot wounds. “Investigators are searching for a person of interest who fled the scene,” the newscaster reports.

We then see Jesse — sweaty and scarred — through the rear view mirror, eyes slightly glazed over and taking deep breaths, as if to calm himself.

Viewers have been clamouring for a movie since the series aired its finale in 2013, but “El Camino” was shot in total secret and only officially confirmed in August with a brief teaser centered on Skinny Pete (Charles Baker). Considering Paul won two Supporting Actor Emmys during the show’s run, it’s only fitting that this “El Camino” trailer debuted during Sunday’s Emmy Awards.

ET recently asked Cranston about how Walter White might somehow appear in the “Breaking Bad” movie, and he teased that he “could be [in] a flashback or a flash-forward,” before disclaiming: “I’m still dead.” 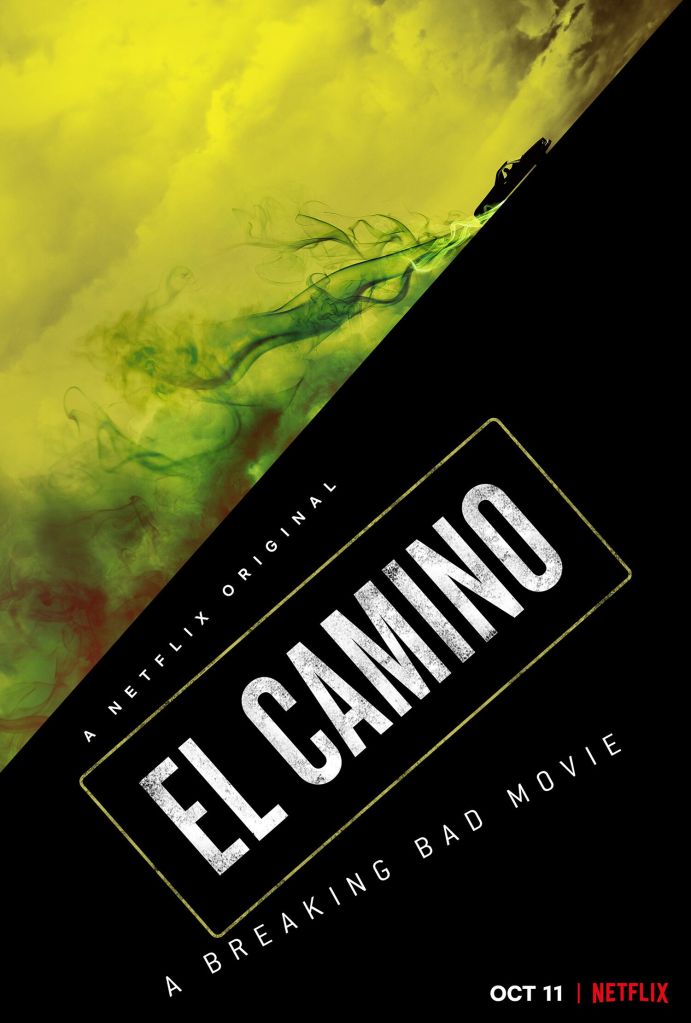 ET Canada’s Keshia Chante caught up with “Breaking Bad”/”Better Call Saul” star Jonathan Banks at the Emmys, who confirmed that Mike Ehrmantraut will be making an appearance in “El Camino”.

“They’ll hit me in the head for saying this… but yes,” she said when asked if he’s in the upcoming movie. “Why not? None of those guys hit very hard anyway.”

“El Camino: A Breaking Bad Movie” will stream on Netflix on Oct. 11, and screen in select theatres during a three-day run. (The movie will make its way to AMC, where the original series aired, in 2020.)

‘Breaking Bad’ Movie: Everything to Know About the Big Screen Sequel