Sarah Hyland went all out when came to enlisting a certain BFF to stand by her side on her upcoming wedding day!

Over the weekend, Vanessa Hudgens revealed in her Instagram Story that she received a very special gift from Hyland. In the image, she proudly showcases a wooden box wrapped with white ribbon and adorned with some decorative leaves. In one corner is Hudgens’ first name is elegant cursive.

And, although Hudgens didn’t let fans in on what the box contained, she did confirm that it was a bridesmaid request by tagging Hyland in the image and adding the a graphic, which reads, “Bridesmaid.” She also included several kissy face and hearts emojis. 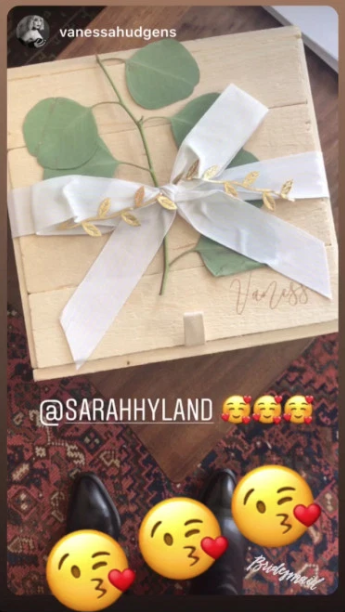 This won’t be Hudgens’ first time as a bridesmaid. She and fellow High School Musical star Ashley Tisdale were part of the wedding ceremony when their friend, Kim Hidalgo, married Pretty Little Liars star Brant Daugherty in June.

The next month, Hyland and longtime boyfriend Wells Adams got engaged while they were on a tropical vacation together. Adams posted a video of the magic moment and the Modern Family star shared photos of the proposal on Instagram, writing, “That can’t eat, can’t sleep, reach for the stars, over the fence, world series kind of stuff ✨❤️@wellsadams.”

However, in August, ET spoke with Adams about why the couple aren’t rushing to plan their upcoming nuptials, choosing instead to enjoy the moment.

“I’ve said it before, everyone is so invested in the next thing. Like when we were dating, everyone was like, ‘When are you moving in?’ And when we moved in, everyone was like, ‘When are you going to get engaged?’ …It’s like, hold on, don’t forget that the destination isn’t what it’s about, the journey is what’s fun,” Adams insisted. “We’re, like, a month into being engaged and I’ve never been engaged before and I assume I’m never going to be again, so I kind of want to just enjoy this little time.”