Billie Lourd On The Importance Of Princess Leia: She ‘Is More Than Just A Character’

Carrie Fisher’s “Star Wars” legacy will always continue on, a fact that her daughter Billie Lourd is remembering in an essay for Time.

“I grew up with three parents: a mom, a dad and Princess Leia. I guess Princess Leia was kind of like my stepmom – technically family, but deep down I didn’t really like her,” the 27-year-old recalls.

Lourd explains that she “couldn’t understand why people loved Leia as much as they did” and that she just “wanted my mom – the one who lived on Earth, not Tatoonie.”

RELATED: Carrie Fisher Was Originally Going To Be The Last Jedi In The Final ‘Star Wars’ Film

It wasn’t until middle school that she finally sat down to fully watch the “Star Wars” movies and only because the boys at school were fantasizing about her.

“My mom? The lady who wore glitter makeup like it was lotion and didn’t wear a bra to support her much-support-needed DD/F’s? They couldn’t be talking about her,” Lourde adds.

It was then that Lourd finally understood what all the fuss was about.

“I’d wanted to hate it so I could tell her how lame she was,” she says. “But staring at the screen that day, I realized no one is, or ever will be, as hot or as cool as Princess F**king Leia. (Excuse my language. She’s just that cool!).”

She started to realize the wide-spread effect her mother had, particularly after witnessing the people who “waited in line for hours just to meet her” during Comic-Con.

“I realized then that Leia is more than just a character. She’s a feeling. She is strength. She is grace. She is wit. She is femininity at its finest. She knows what she wants, and she gets it,” the emotional essay adds. “Princess Leia is Carrie Fisher. Carrie Fisher is Princess Leia. The two go hand in hand.”

Lourd continues to detail about how her mother encouraged her to audition for “The Force Awakens” and once she landed the part, her mother turned into the typical stage mom. 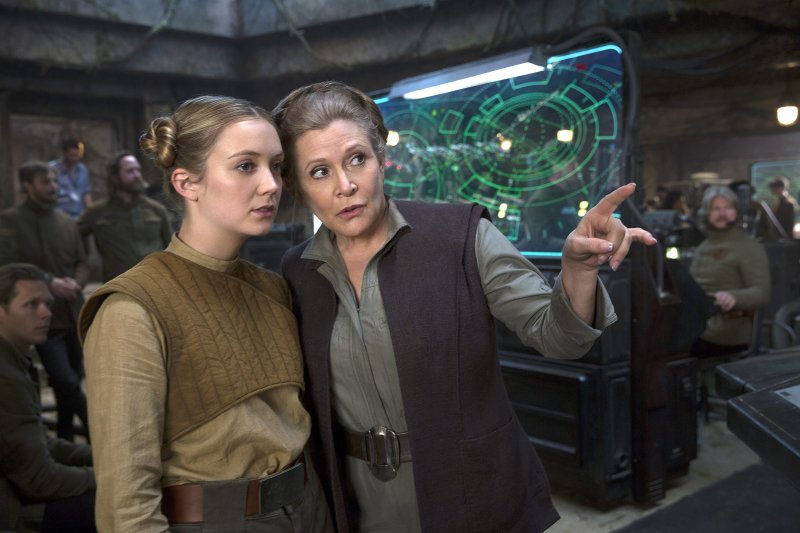 “Even though she complained for years about how the iconic Leia buns ‘further widened my already wide face,’ she desperately wanted me to carry on the face-widening family tradition,” the young star says. After trying out a few different other styles, it was back to the Leia buns. “She stood in the mirror behind me and smiled like we had gotten matching tattoos.”

RELATED: Mark Hamill Reacts To His ‘Star Wars’ Audition Video: ‘Why Did I Call Him ‘Hans’?’

From there the two got to star in “The Last Jedi”- Fisher’s last “Star Wars” film before her death.

“We wrapped The Last Jedi a little less than six months before she died. I went back to L.A. to film the show I was on, and she stayed in London to film the show she was on. One of the last times we spoke on the phone, she talked about how excited she was that the next movie in the trilogy was going to be Leia’s movie. Her movie,” Lourde writes. “She used to say that in the original movies, she got to be ‘the only girl in an all-boys fantasy.’ But with each new Star Wars movie, the all-boys fantasy started to become a boys-and-girls fantasy. She was no longer a part of a fantasy, but the fantasy herself. Leia was not just a sidekick one of the male leads had on his arm, or a damsel in distress. She was the hero herself. The princess became the general.”

As “the keeper”, director J.J Abrams discussed with her what “the plans for Leia” would be. “This last movie was supposed to be Leia’s movie, and we wanted it to remain that, as much as possible,” but a surprise turn was coming. “What I hadn’t known–and what J.J. told me that day –was that there was footage of my mom that they had collected over the years that hadn’t made it into the movies, footage that J.J. told me would be enough to write an entire movie around. It was like she had left us a gift that would allow Leia’s story to be completed. I was speechless.”

Lourd made the difficult choice to come back as Lieutenant Connix, “For Leia. For everyone Leia means so much to. For everyone Leia gives strength to. For my future kids, so someday they’ll have one more movie to watch that Mommy and Grandma were in together.”

“Star Wars: The Rise Of Skywalker” comes to theatres on Dec. 19.