T.I.’s Daughter Deyjah Harris Seemingly Responds To His Comments About Her Virginity By ‘Liking’ These Tweets

T.I.’s daughter appears to have some thoughts on his recent comments about checking on her virginity.

Though Deyjah has yet to speak out on her father’s comments, an unverified Twitter account seemingly belonging to her has been liking tweets which call T.I.’s behaviour “possessive.”

The account liked one tweet which stated, “This is disgusting, possessive and controlling *whew*,” in response to the story, as well as another, which claimed, “This is just beyond possessive.” 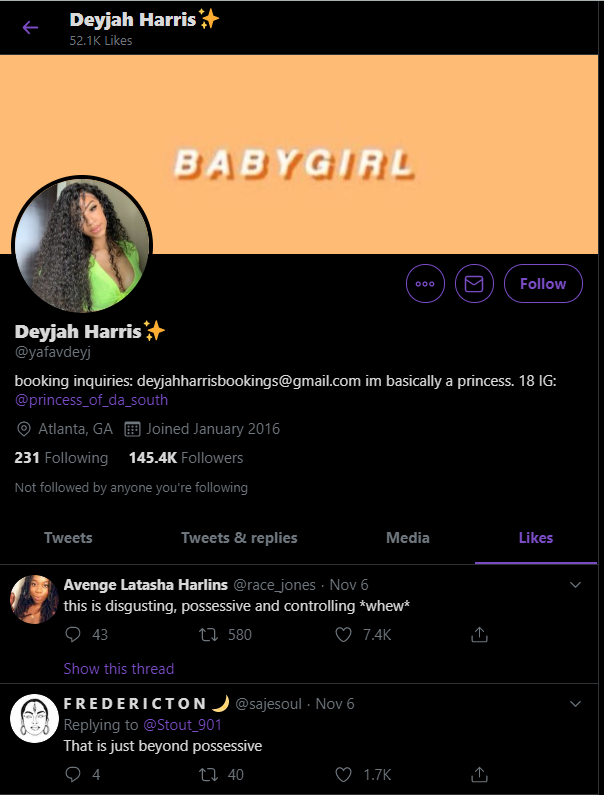 On the podcast, T.I. said that the yearly gynecologist appointments with Deyjah started after she turned 16. He also noted that the doctor initially expressed privacy concerns over sharing Deyjah’s medical information without her consent though she allowed him to, and that the doctor informed T.I. that a “broken” hymen doesn’t always come from having sex. Still, the rapper insisted he wanted the doctor’s report.

“They come and say, ‘OK, well, I just want you to know that there are other ways besides sex that the hymen can be broken, like, bike riding, athletics, horseback riding and just other forms of athletic physical activity,'” he recalled. “So I say, ‘Look, Doc, she don’t ride no horses, she don’t ride no bike, she don’t play no sports, man. Just check the hymen, please and give me back my results expeditiously.'”

T.I. Says He Accompanies 18-Year-Old Daughter to Doctor Appointments to Make Sure She’s Still a Virgin