Inside Ashley Graham’s ‘Above And Beyond’ Baby Shower: Ear Piercings, Tattoos And Nail Bar

Ashley Graham is gearing up for the arrival of her baby boy!

A source tells ET that the 32-year-old model and husband Justin Ervin celebrated their baby shower with family and friends at The Foundry in New York on Friday night.

The expectant mother was all smiles at the shower, which began around 6:30 p.m. ET, the source says. She was rocking a red midi dress by Victor Glemaud and sneakers, and she even busted out some dance moves with music playing all night long, which included tunes by Mary J. Blige and Aaliyah.

According to the source, with Ervin by her side, the mom-to-be took the microphone during the celebration to thank their family and friends for being there. Graham sent her gratitude to everyone for their prayers and support, saying, “We can’t raise this baby boy without all of you and we’re so excited to do it with all of you. You are our community, our loved ones.” Graham finished her speech cheering, “Let’s party!”

“You could tell Ashley and Justin are so in love in the old-school sense, the way they fawned over each other,” the source says. “It was too cute.”

Inside the event, there was a nail bar, an ear piercing station and tattooing available, the source adds, saying “It was above and beyond.”

At the shower, guests were treated to finger foods like sliders, salmon and a massive sweets table, which included fruit-flavored candies, gumballs and chocolates. For dessert, there were cupcakes that spelled out “Welcome Baby Ervin” and a five-tier vanilla cake adorned with flowers, hearts, birds and “Baby Ervin” decorations. There were also churro ice cream sandwiches. On the tables, there were little white napkins with “Baby Ervin” written in blue. 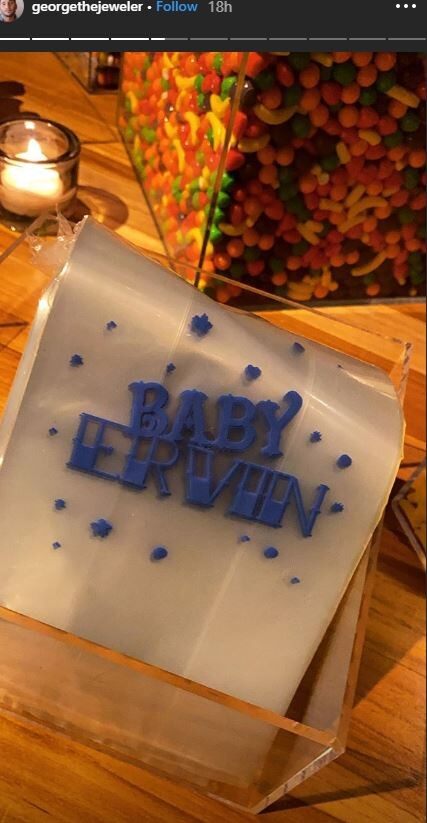 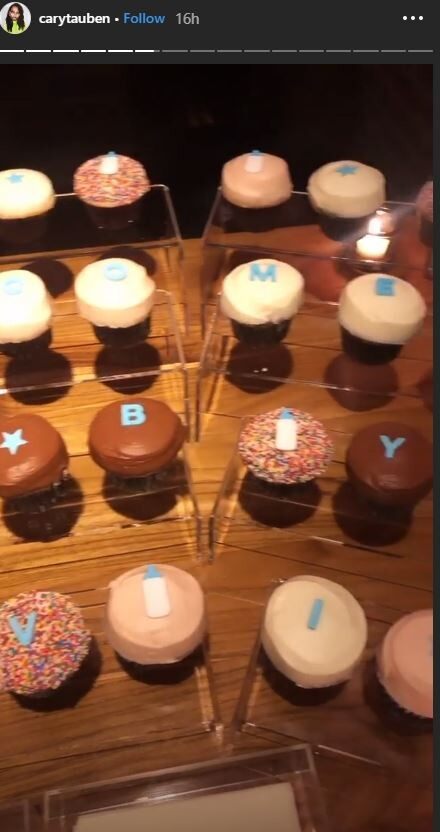 In attendance was jeweler George Khalife, who posted a photo with the couple. “Congrats to the mama to be! #queen,” he captioned his post.

Congrats to the mama to be! #queen #georgethejeweler

Stylist Cary Tauben also shared a pic with the gorgeous Graham. “Celebrating this hot momma to be @ashleygraham,” he wrote.

Celebrating this hot momma to be @ashleygraham

Mama Glow – So happy for @ashleygraham and papa Justin!!! If you caught her on @theellenshow this week she announced that she is having a BABY BOY! 👶🏽 He’s coming soon!!! In the meantime Ashley’s podcast is about to drop next week and her fitness series is here. She’s getting so much done so she can relish her maternity leave! Salute to her entire team for how well they have supported her throughout this pregnancy. This baby is coming into the world with so much love. Your community really loves you and it’s so beautiful to see everyone come together in the name of love, new life, new beginnings. I’m so proud of you Ashley and Justin. You’re going to be amazing parents. Bless you and your budding family. _ P.S. this shower was so 🔥 @kissthedeejay was on the 1s and 2s, you could get tattoos, ear piercings and decorate baby onesies that are being donated to families in need. I was too chicken to get a tat or another ear piercing 😂@Fridamom made a custom labor and delivery kit for Ashley – so adorable!!!! #mamaglow #doula #ashleygraham #babyboy #babyshower #family #fridamom

You have to be inspired to inspire. @ashleygraham you are an unending source of inspiration to me and so many others. Your journey through motherhood will be no exception, and I’m honored to play a small part in your preparation process. #vagsquad #boymoms @fridamom @fridababy

Earlier this week, Graham revealed that she and Ervin are expecting a baby boy. The couple tied the knot in 2010 and announced they were having a baby in August.

ET spoke to Graham late last month at the premiere of the new Apple TV+ series “The Morning Show”, where she gave an update on her pregnancy.

“I’m feeling good … I can’t stop rubbing the bump,” she said. “Cantaloupe, celery, cucumber — those have been my biggest cravings. Isn’t that weird? I’m happy about it, but also I wanted to eat French fries every day, but I don’t want it.”

For more on Graham’s pregnancy, watch below.

Pregnant Ashley Graham Shares Video of Her Naked Body: ‘Getting Bigger and Bigger’