It’s been more than two years since the last episode of “Rick and Morty” aired, but the twisted Adult Swim animated comedy is back with a vengeance as fans await the debut of the long-awaited fourth season on Sunday.

For the uninitiated, the series follows the bizarre and often surreal adventures of a not-too-clever kid named Morty and his… let’s say unorthodox grandfather Rick, an alcoholic mad scientist who has mastered inter-dimensional time travel, among other things.

ET Canada spoke with series creators Justin Roiland (who voices both Rick and Morty) and Dan Harmon (a cult hero in his own right thanks to his still-beloved NBC sitcom “Community” and his wildly popular “Harmontown” podcast) about season four, how they nabbed new-season guest stars such as Paul Giamatti and Sam Neill, and an update on a hugely anticipated episode they’ve been working on with “Rick and Morty” super-fan Kanye West.

While the new season of “Rick and Morty” has been a long time coming, the duo recently signed a deal to produce a staggering 70 more episodes. Do they find having that many episodes ahead of them to be daunting or liberating?

“It depends on the week. Ultimately, I think it’s liberating because we have so many ideas and they kind of bleed across seasons,” says Roiland. “But if you think about it from a macro perspective, it can be like, ‘Holy crap, we’re going to be doing this for a long time.'”

“I think liberating is the easy answer,” adds Harmon. “It meant that Justin and I could stop focusing on multiple projects and focus more on ‘Rick and Morty’ alone. It means that now, more than ever, we’re truly free.”

RELATED: ‘Rick And Morty’ Returns For Season 4 With New Trailer And Release Date

The new season, says Harmon, is ideal for people who’ve heard of “Rick and Morty” (possibly because of this) but haven’t managed to actually sit down and watch an episode yet. “Strangely enough, this is sort of a decent season for you to watch with your friend who has never seen the show,” says Harmon of season four. “We don’t think they’ll be lost. There’ll be familiar things to reward the old viewer, but in a lot of ways it’s starting fresh, there was no giant cliffhanger at the end of the last season that needed to be paid off in the first episode… I think you can just jump on in, and maybe it’ll inspire a binge of what you missed later.”

The new season also boasts a number of big-name guest stars, including Paul Giamatti, Sam Neill, Taika Waititi and Kathleen Turner, and the pair explained that the actors’ children are often responsible to getting the stars to lend their voices to the show.

“We’ll find out that their kids are just blown away,” says Roiland. “It’s so funny to hear from Sam Neill or Paul Giamatti or any of those people, like, ‘My kids, this is the first thing I’ve ever done that they actually give a s**t about.’ It’s so crazy for me to hear that, like, that is surreal. Like, your kids don’t like ‘Jurassic Park’? This is more important than all of that? So there’s a bit of that, like, ‘Dad, you should really do it.’ But it’s also, you can tell they’ve popped the hood and checked it out, and they like the show.”

As Harmon notes, having stars’ kids who are majorly enamoured of “Rick and Morty” has been an unexpected boon. “That’s where you get some real icons, like Susan Sarandon and Christian Slater, where they’ve got this big chance to be impressive in the eyes of their young ones,” he says. “And we’re happy to take them up on that.” 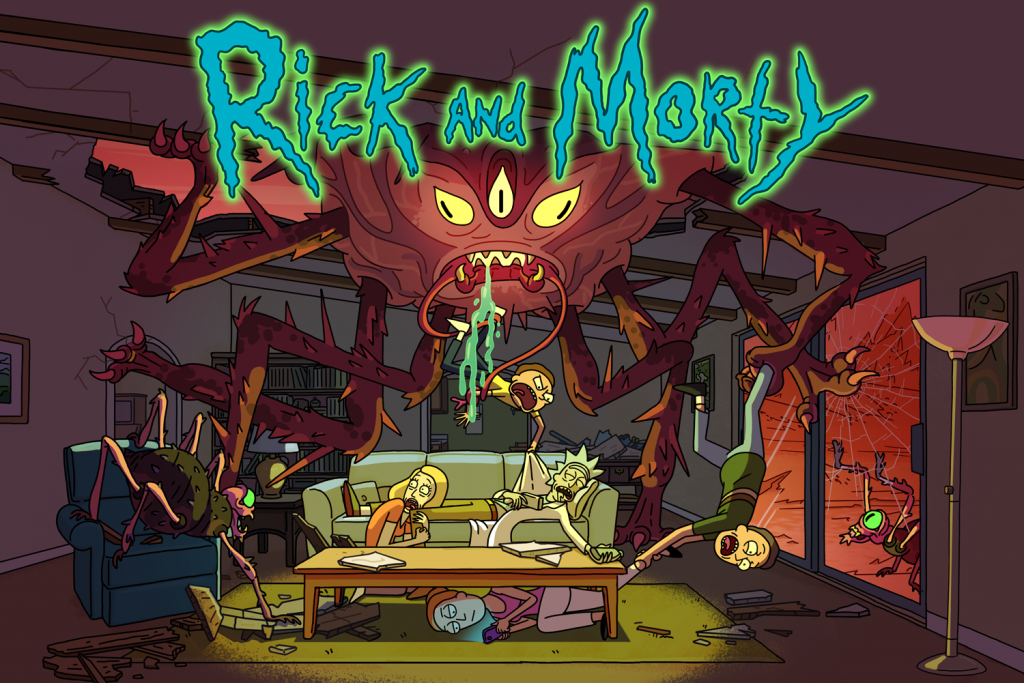 A while back, news emerged about another celebrity super-fan, Kanye West, who was so in love with “Rick and Morty” that he upped the ante by offering to collaborate on an episode — an offer that Harmon and Roiland eagerly jumped on.

As Roiland confirms, they’ve actually met with the “Gold Digger” rapper to discuss the episode, but have no idea when it will actually happen.

“There’s not a clock on it,” says Roiland. “We’ve hung with him, we’ve chatted, we’ve brainstormed… I don’t know when that will materialize, if it will materialize, but I know if it does it will be amazing. Kanye, the more I get to know him, he has a really good sense of humour about himself. He’s awesome, he’s a great guy. I think that was kind of the coolest thing to discover in getting to know him, was just what a chill guy he is and what a great sense of humour he has about his image and all this stuff that’s out there, he’s just very grounded about all this stuff.”

Kanye with the @RickandMorty crew a couple days ago. Looks like we’re getting that Kanye episode. 😬 pic.twitter.com/WrGnRNwTfg

“It was pretty thrilling, actually,” says Harmon of brainstorming with Yeezy. “Some of that obviously is just the awareness of how much fame this person has. It’s kind of interesting… this person is a household name. My mom and my 6-year-old niece would know who this person is. Aside from that, in a vacuum kind of separating that factor out, just as a human being, I had a lot of affinity for him. He’s a very self-effacing guy, he describes himself as not neuro-typical, kind of on the spectrum, he kind of owns that scatteredness.”

RELATED: The ‘Rick And Morty’ Birthday Song For Kanye West Is Everything

According to Harmon, meeting with West felt “kind of like a play date,” and actually debunked a lot of preconceived notions the media perpetuates about him.

“He’s sort of famous for his one-sided dialogue, where it’s just him going off for awhile, but one thing I found really interesting about him is that he’s waiting for you to interrupt,” says Harmon with a laugh. “He’s fine to have a conversation with people, but he can also just talk for awhile. And I really enjoyed talking to him. He’s really attentive and aware of himself and didn’t see it as his business to try to be funny or a story guy, he just wanted to talk about some concepts and some things that he believes in and stuff.”

Of course, when you’re working with someone on West’s level, complications understandably arise.

“I think that we all kind of agreed that it would need to be a very special episode and would have music production as a heavy element central to it,” says Harmon of the potential episode. “Nobody on either side would want that not to be controlled by Kanye. So that creates an issue that creates some negotiation. If I were Kanye’s people I wouldn’t allow him to leap into his favourite show and say, ‘Hey, I’ll make all the music for it,’ without there being some sort of paperwork involved. I think that’s probably what’s going on right now, probably a flotilla of lawyers negotiating all the ins and outs — but probably all in the interests of, at the end of the day, making it possible for someone like him to confidently jump into a room and go, ‘Yeah, I’m just going to start spewing ideas musically.’ I’m sure it’s all for the common good, but I’m not surprised if it will take awhile.”

Harmon also sends out a special thanks to Canada, where “Community”, he recalls, received an outsized degree of attention during its six-season run.

“I thank everybody up in the Great White North for watching,” Harmon says. “Also I owe such a thank you to Canada for the success of ‘Community’ on the internet. It was always so driven by Canada… all of the most creative videos I would see on YouTube, supercuts and stuff about different characters, there would always be that Citytv logo.”

Quips Harmon: “I think Canadians helped pay for my first house, I really thank them for that.”

The fourth season of “Rick and Morty” debuts Sunday, Nov. 10 on Adult Swim.