Nick Carter was granted a one-year restraining order against his younger brother, Aaron Carter, on Wednesday, according to multiple reports.

The ruling, handed down in Las Vegas on Wednesday, requires Aaron, 31, to stay clear of Nick, 39, and his family until November 2020.

The judge’s decision arrives just one day after Aaron lost another restraining order case with his twin sister, Angel, in California. According to court documents previously obtained by ET, the Los Angeles Court granted Angel a domestic violence restraining order protecting her from Aaron for a period of one year, which expires Nov. 19, 2020.

ET also previously learned that the judge ruled that Aaron needed to surrender his firearms on Sept. 20 when the judge entered the initial Temporary Protective Order. On Tuesday, the judge extended the protective order for an additional year, which means Aaron cannot possess firearms for another year.

He was ordered to not come within 100 yards of Angel or her husband, Corey Conrad, their home or their places of business, and not to harass or threaten them in any way, including on social media. Aaron soon took to social media to claim Angel lied in court to “take away” his firearms.

“I am devastated by what happened in court today,” Aaron wrote on his Instagram Story. He went on to claim, “My sister lied over and over in an effort to take away my 2nd Amendment rights and she did it on behalf of my brother [Nick] to silence me talking about how he raped and sexually assaulted multiple women. I will abide by the judge’s order, but I will not stop speaking on behalf of victims such as Melissa Schuman. I am saddened by my family and what they have done to me. Your lives have broken my heart.” 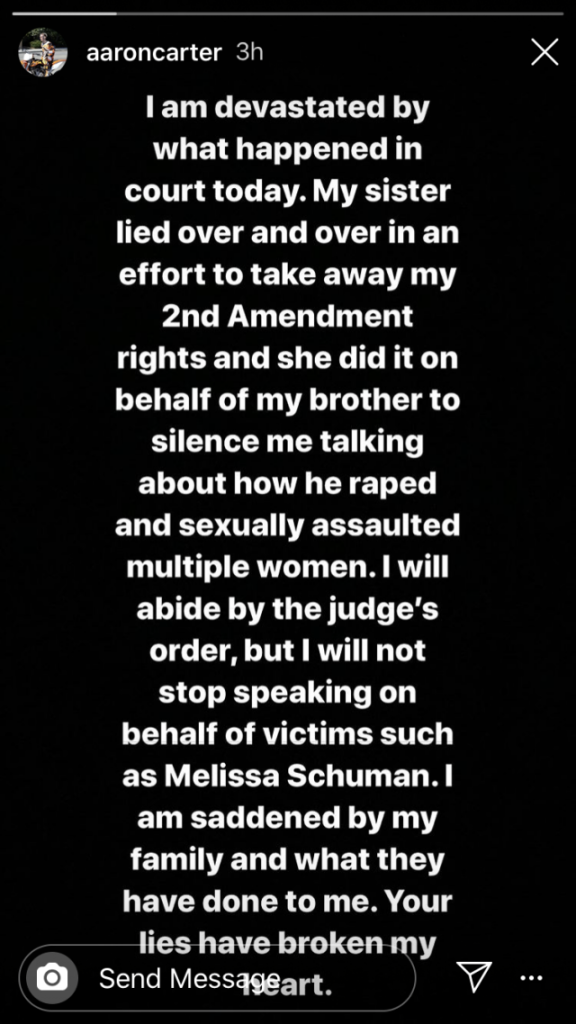 Aaron has had a contentious relationship with his family for months, including Twitter feuds. In September, Nick revealed that he and Angel had taken out a restraining order against Aaron, claiming that his brother had threatened their family.

Aaron also visited “The Doctors”, where he shared that he’s been diagnosed with multiple personality disorder, schizophrenia, acute anxiety and manic depression. He also shared that he was taking a number of prescription medications.

Since the California restraining order was filed, Aaron has gone back and forth from seemingly apologizing to his family to telling them to leave him alone.

ET spoke with Aaron last month, where he opened up about his recent family drama. Check out the video below to hear more.