Ryan Reynolds is embracing the wide world of K-pop!

On Monday, the 43-year-old actor was in Seoul, South Korea, for the world premiere of his upcoming action film, “6 Underground”. Also at the event were Suho, Baekhyun, Chen, Chanyeol, Kai and Sehun, six of the nine members of the hit-making boy band EXO, who got the chance to pose for photos with Reynolds.

Soon afterward, the leading man posted some of the images from the gathering, writing: “I’m in the band. No, for serious. The security guard who tasered me was part of a carefully choreographed sequence me and the guys have been working on from our basement studio in my imagination. @weareone.exo 🇰🇷🇰🇷🇰🇷”

Thrilled to be EXO’s newest member. I might not be able to dance or sing, but one thing’s for damn sure: I have no idea how to give the “thumbs up” sign. Honestly, I never learned it. @weareoneEXO @Bosslogic pic.twitter.com/tqxuvIuSuh

I’m in the band. No, for serious. The security guard who tasered me was part of a carefully choreographed sequence me and the guys have been working on from our basement studio in my imagination. @weareone.exo 🇰🇷🇰🇷🇰🇷

Reynolds also shared a photo of himself with Chanyeol in his Instagram Story, noting, “This means I’m in the band.” 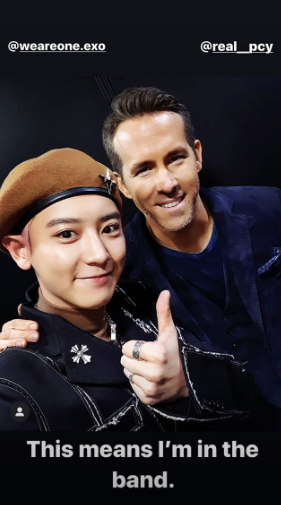 A graphic artist named Boss Logic shared one of the group photos from the event in which he gave Reynolds purple locks, making him a better fit with the group. The actor shared the image as well, writing, “I already feel so much better.” 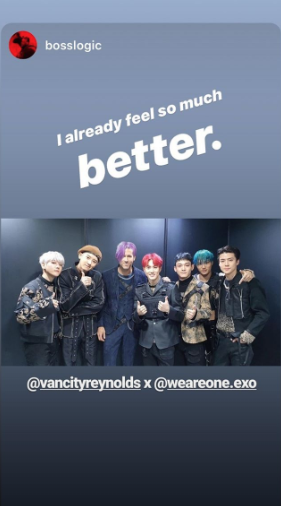 Sehun also shared photos of him and the other EXO members with Reynolds, as well as his 6 Underground co-stars, Melanie Laurent and Adria Arjona. At the event, EXO also performed their new song, “Obsession,” for attendees.

Just last month, Reynolds popped up in another surprising place — on “Saturday Night Live”. The “Deadpool” star was in the audience for host Will Ferrell’s opening monologue, where he hilariously pulled some focus.

“Excuse me but you look a lot like Ryan Reynolds,” Ferrell said, distracted by the A-lister’s presence in the studio audience.

“I get that a lot,” Reynolds replied.

Ferrell jokingly got flustered as he tried to get back into the rhythm of his monologue, but couldn’t keep it together and just kept asking Reynolds questions, including why he was there.

“Like I said, we’re big fans,” Reynolds said, explaining that his wife, Blake Lively, was watching from home. Soon Tracy Morgan came out to defend Ferrell as the bit went off the rails.

See more on Reynolds below.

Blake Lively Steps Out With Ryan Reynolds for First Time Since Welcoming Baby No. 3