Rick’s Half Hour With The NKOTB!

I was the envy of all New Kids on the Block fans when I sat down with the guys recently and I have to admit I was pretty pumped up about it!

It all started with a 10:45 a.m. arrival at the Park Hyatt on Avenue Road in Toronto. Soon after, one of the most popular boy bands in music history entered ET Canada“s interview room – Jordan, Joey, Danny and Jon… no, unfortunately Donnie was M.I.A. as he was finishing up filming on his Blue Bloods set. 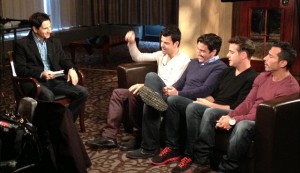 I had interviewed many boy bands in my time… and I mean many – from “N Sync to BSB and 98 Degrees to The Wanted, but I had never, in close to 18 years of doing this, interviewed the grandaddy of em all – New Kids on the Block! We talked for around 30-minutes and touched upon everything from their new album “10”;, to next month’s tour with co-headliners Boys II Men and 98 Degrees, to the “dark days’ for NKOTB with the arrival of grunge, their heart and soul, “the fans”; and even did some duets with the boys.

The interview was a long time in the making (watch the full half-hour ET Canada Conversations: New Kids On The Block special episode on ET Canada Monday, May 20 at 7:30 p.m. ET/PT).

Later in the afternoon we followed the guys to their meet and greet, which was held at the Pickering Town Centre just outside Toronto. Wow did that ever bring back memories. Thousands of screaming girls waited to catch a glimpse of their idols and the “lucky 300″ who had purple wrist bands received signed photos of the band. I was fortunate enough to co-host the event with the Global Toronto Morning Show“s Kris Reyes, who was a huge fans of NKOTB in her own right – Kris was even sporting their retro New Kids tee. Kris and I went over the house rules with the thousands of screaming fans, then the place erupted as we called the guys to the stage.

They walked on to their song Remix and gave the crowd a spontaneous one-song mini-concert. It was deafening. Screams from all directions, non-stop flashes and personal devices as far as the eye could see – good times! Not just any band could attract this much love, this much attention – and I’ve never seen any band give as much back to their fans as this band did.

Tune-in on Monday, May 20 for the half-hour ET Canada Conversations: New Kids On The Block special and see a sneak peek below!