While it has been over 10 years since Kaley Cuoco and Johnny Galecki dated, the former couple and “Big Bang Theory” co-stars can still have some fun with each other.

The actress, 34, premiered a new episode of her IGTV series, “Cup Of Cuoco”, on Sunday explaining why she skipped out on a hiking trip with hubby Karl Cook and his family in Patagonia.

As Cuoco explained, she had already planned to stay home while she had a short holiday break from filming her upcoming HBO Max series, “The Flight Attendant”, to “get situated” in the new house she and Cook had just bought.

RELATED: Kaley Cuoco Nurses Hangover As She Wraps ‘The Flight Attendant’ For The Year

“But I’m not a big hiker, so I think Karl probably would enjoy this trip more without me,” she added. “I mean, I hope not. But I think that he will, so I think we made the right decision.”

“I probably would have held him back on those hikes, anyway.”

RELATED: Kaley Cuoco ‘Can’t Believe She Turned An Age On Camera’ As She Celebrates Her Birthday In Bangkok

But in response to the latest episode, Galecki took to the comment section to write, “I kinda enjoyed the absence. Please let me know once you plan the next. Thank you. XO.”

His hilarious comment was loved by many of Cuoco’s followers. 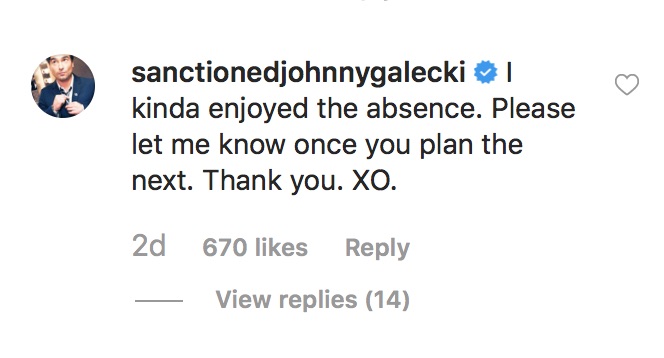 “I think it’s okay to do separate things like that,” Cuoco continued in the episode. “I think it’s really good for your relationship.”