Victoria Beckham got a rare night off during a fashion week as the designer attended the Dior show in Paris with husband David Beckham.

The two were at the Dior Homme Menswear Fall/Winter 2020-2021 show on Friday where they cuddled up.

Dressed in an outfit from her own line, Victoria revealed on her Instagram Stories that David had to tie her shoes because her pants were too tight. 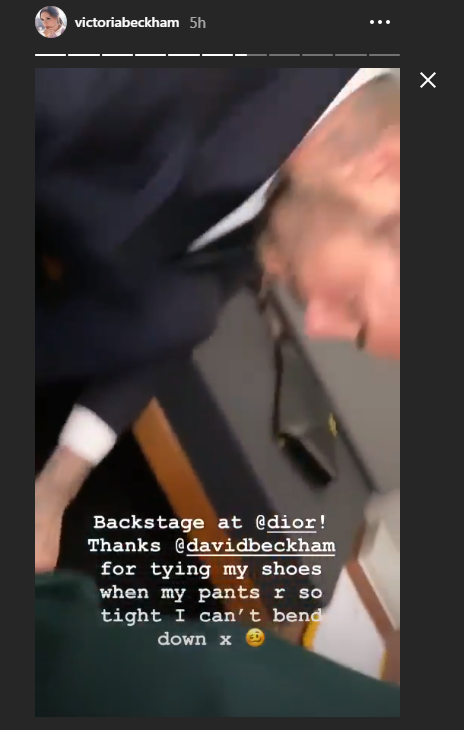 Their son Brooklyn was also with them who spent time backstage checking out Dior’s 2020 accessories after he sat between his parents in the front row. Kate Moss was seated on the other side of Victoria.

RELATED: Victoria Beckham Reflects On Her Time With The Spice Girls: ‘I’m So Proud Of Everything We Achieved’

But things weren’t all calm. The show got off to a rocky start.

Victoria Beckham turned up unexpectedly. Kate Moss rocked up late. And two guests, who sat too near the catwalk, were the targets of taunts and screams by photographers and physically pulled out of the show by security.

But once things calmed down, Kim Jones’ show was a big success.

Later this week, Victoria will have her own show to present.

With files from Associated Press