The late Nipsey Hussle is still being honored after his death.

Nipsey won Best Rap Performance at the 2020 GRAMMYs on Sunday for his hit “Racks in the Middle” featuring Roddy Rich and Hit-Boy. The late rapper, whose real name was Ermias Asghedom, tragically died last March after he was shot outside his Marathon Clothing store in Los Angeles. He was 33 years old.

This is Nipsey’s first GRAMMY win. His grandmother and his brother accepted the honor on his behalf.

“I wanted to thank all of you for showing all the love that I have felt for him all of his life and will always live in my heart, so: thank you. Thank you,” she said.

Hussle is nominated for a total of three awards at this year’s GRAMMYs including Best Rap Song for “Racks in the Middle,” as well as Best Rap/Sung Collaboration for his hit, “Higher,” with DJ Khaled and John Legend.

On Sunday, Nipsey’s longtime love, Lauren London, shared a picture of the rapper with Kobe Bryant as news of the NBA legend’s death after a helicopter crash in Calabasas, California, shocked the world. Nipsey was a huge fan of the Los Angeles Lakers and often sat courtside with London. 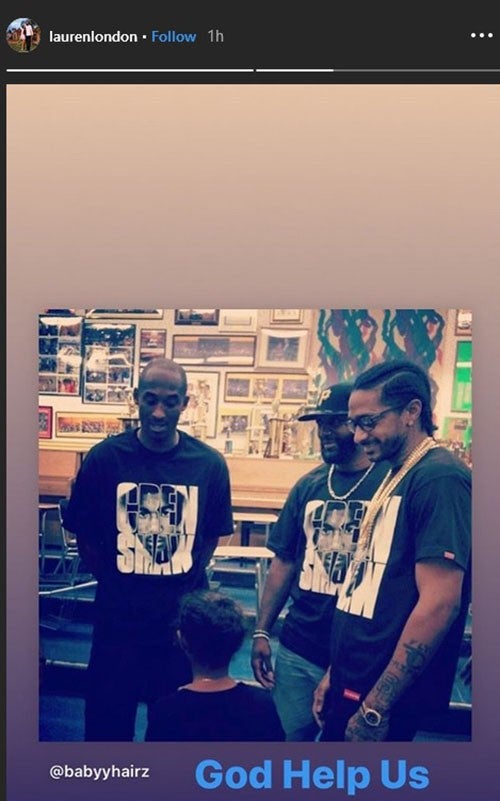 Rapper Meek Mill, who’s performing at the GRAMMYs tribute to Nipsey, also Instagrammed a picture of Kobe and Nipsey warmly greeting one another.

“This life will never be the same,” he wrote.

This life will never be the same

Hussle was laid to rest with a private burial at the Forest Lawn Cemetery in Los Angeles last April. The burial came one day after Hussle’s family, friends and fans gathered together at Staples Center for a Celebration of Life Memorial Service. The hours-long service featured emotional speeches and performances from stars like Snoop Dogg and Stevie Wonder and memories from London, his sister, Samantha Smith, and parents Dawit Asghedom and Angelique Smith.

ET spoke with DJ Khaled in August at the 2019 MTV Video Music Awards, and he talked about collaborating with the late rapper on “Higher.”

“First of all, the marathon continues. Long live Nip,” he told ET.

“I told Nip when we were making the record, ‘We gonna get some awards. We gonna get nominated,'” he added of the song’s critical reception.