Shania Twain is walking back a famous line in one of her biggest hits to reveal that, contrary to what she sang, Brad Pitt actually does impress her much.

In an interview with the Daily Telegraph‘s Stellar Magazine, the 54-year-old singer is asked if she’d seen the meme that emerged last year related to Pitt’s movie “Ad Astra”, pointing out he was playing a rocket scientist with a buggy-like car — “three things that don’t impress Shania Twain much.” 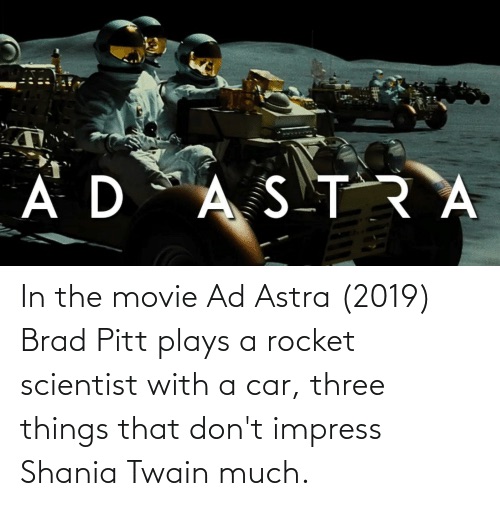 RELATED: Shania Twain Is Not Impressed By Shark Week Deception In Hilarious Video

“Yes, I did see it,” she told the magazine with a laugh. “I think it’s awesome; I like to write with a sense of humour. I didn’t realize it would go this far or be memorable. I’m thrilled that reference has lasted the test of time.”

She also offered praise for Pitt, admitting she’s “very impressed by Brad’s wonderful career. He’s been getting some great accolades recently, so I’m very proud of Brad. I hope he takes it with the sense of humour that was intended.”

In a 2017 interview with Billboard, Twain revealed why she used Pitt’s name in the song instead of some other handsome actor.

“You want to know the truth about this story? I’ve never told this before. I’m going to say it now,” said the Ontario-born singer.

“I remember I had a girlfriend visiting me and it was near Christmas and we were baking cookies. I was writing this album and there was a scandal of [Pitt] and Gwyneth [Paltrow] where there was naked photos of him [in Playgirl magazine, which Pitt later successfully sued for publishing the paparazzi photos]. And this was like all the rage. I just thought ‘I don’t know what all the fuss is about.’ I’m like, well that don’t impress me much, I mean what is all the fuss. We see people naked every day. That’s really what I thought. I wasn’t picking on Brad Pitt. But that was just the association in that moment and things we make fusses about and whatever. Of course, it could have been any gorgeous guy.”