Maren Morris and Ryan Hurd’s newborn has quite the music playlist!

Just days after giving birth to her first child with husband Ryan Hurd, the 29-year-old new mom is revealing that baby Hayes is listening to her music.

Hozier, an Irish musician who collaborated with Morris on a version of her song, “The Bones,” tweeted the country singer a video of a fan’s crying baby who was calmed by their 2019 track. Well, Morris responded to the heartwarming video, saying, “This is too much for words. I will say, the same thing doesn’t work for my baby.”

While the Hozier and Morris collaboration may not be doing the trick for baby Hayes, Hurd took to social media to let fans know his newborn has been listening to The Beatles, Avett Brothers and “the saddest country songs.” 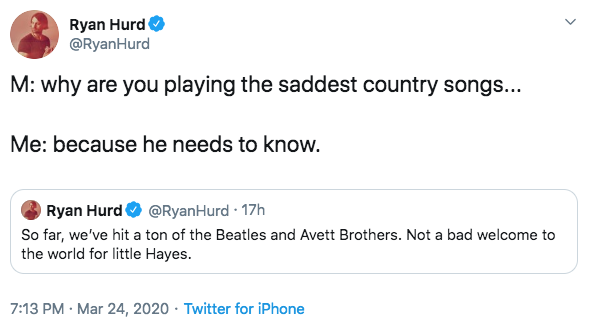 When ET spoke with Hurd and Morris at the CMA Awards in November 2019, the couple, who met each other writing songs together in Nashville, revealed they had yet to pen any lullabies for their son.

“A lot of like Limp Bizkit and Steel Panther,” Morris joked. “That’s what we’re going to play our kid.”

The family of three plan to hit the road this fall together on Morris’ RSVP: The Tour with Hurd as a special guest performer.

“I think I’m on this tour just to hold a baby between 9:30 and 11 [p.m.],” Hurd joked to ET earlier this month, adding, “This kid’s gonna grow up on a bus. He’s probably going to be so sick of music by the time that he’s six or seven years old. He’s just going to want to be a math major or something.”

Time will tell what the future holds for baby Hayes, but one thing is for certain — he is definitely a musical baby!

For more on Maren Morris and Ryan Hurd’s relationship, watch the video below:
More From: