Justin Long and Drew Barrymore still have a lot of respect for each other after dating.

The two who starred in “He’s Just Not That Into You” and “Going the Distance” together were also on-and-off between 2007 to 2010.

The online interaction between Long and Barrymore started with a post from Paper Magazine on Instagram which involved three pics of Long with the caption, “Might get fired for this but. F**k it. Justin Long appreciation post.”

RELATED: Drew Barrymore Shares Tribute To The Fitness Trainer Who Got Her In Shape For ‘Santa Clarita Diet’

“ah what do YOU know?! I feel like I’m on an episode of ‘This is Your Life’ #HipMillenialReference texting you a great photo booth pic I just found during my quarantine clean! 😌🐶,” Justin responded. 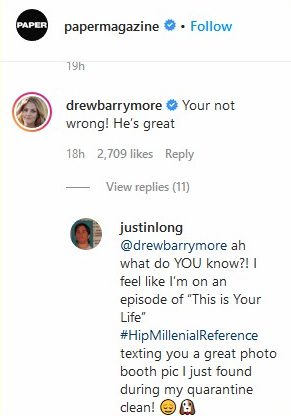 Long also thanked the magazine for showing him some love.

“Whoa! This was such a nice unexpected thing to read (I’m afraid to read the comments though haha). THANK YOU. Really. 😌🙏#PaperMagAppreciationComment!” he added.