Brad Pitt. Ryan Phillippe. Alec Baldwin. Leonardo DiCaprio. Justin Hartley. Kevin Bacon. Jensen Ackles. These leading men all clocked time on soap operas for guest appearances, recurring roles or, in some cases, years and years of drama. Tom Pelphrey can consider himself a member of that distinguished club as well. The “Iron Fist” actor enjoyed a five-year stint as Jonathan Randall on “The Guiding Light” before moving on to other endeavours. In hindsight, Pelphrey believes that the medium helped shape his work ethic.

“I got to work with some great people, some older actors, who were excellent mentors,” Pelphrey reflects during a phone conversation with ET Canada. “They showed up prepared and on time, and really instilled some excellent values. When you are shooting a soap opera, we were filming an hour of television every day. It’s insane. To give a reference, you are filming 60 pages a day. On a show like ‘Ozark,’ you may be doing six pages a day. One of the things you take away from that experience is an ability to show up prepared and work fast.”

“Ozark” follows Marty Byrde (Jason Bateman) and his wife Wendy (Laura Linney), money launderers who’ve been caught up dealing with a foreign, merciless drug cartel while trying to hide out in the Ozarks of Missouri. As viewers know, Pelphrey, 37, came on board for the just-dropped third season. He plays Ben Davis, Wendy’s younger brother, who suffers from bipolar disorder. When he unexpectedly lands on their doorstep, his presence places the Byrdes in the line of fire. Pelphrey admits he loved the Emmy-nominated series even before auditioning for the part.

“I had seen the first two seasons,” Pelphrey says. “I was impressed by all of the actors, but also the writing and the tone of the show. I responded to the dark, violent world that was filled with humour. That’s a very hard balance to strike. There were so many ways that this job was an excellent opportunity. As excited as I was to audition, I didn’t even realize the full extent of what the job would be. It turned out better than I even thought it would be.”

“As the actor, it feels like cheating in a way,” he continues. “I get to go to work with writing that is this good. I feel 10 steps ahead of the game. I believe good writing really does make that much of a difference. You do your research and show up prepared, but the writers and [showrunner] Chris Mundy were very smart about how to demonstrate different aspects of the character and when. The build of that was well executed long before I had anything to do with it.”

Ben’s mental illness becomes intrinsic to the character and the third season’s plot. Pelphrey consequently did his due diligence in order to properly portray all the nuances and gravitas associated with the disorder, including reading Kay Jamison’s book, An Unquiet Mind, to further comprehend how bipolar can hit, the toll it takes on loved ones, as well as the effects of lithium and how the drug interplays with stress, alcohol and other substances.

“There is no definite, set in stone ‘This is what this looks like,’” Pelphrey explains. “It’s always going to be different, depending on the person and depending on the circumstance. For me, it was just about getting as much information as possible so that I could use whatever discernment I have to understand what applies where. Again, a lot of this helped by the writing.”

Ben might bond with Marty and Wendy’s son, Jonah [Skylar Gaertner], but he also puts his family in jeopardy. When Ben snaps at the Byrde’s ruthless associate, Helen Pierce [Janet McTeer], and goes off on a tirade in front of her daughter, it leaves Wendy in the precarious position of cleaning up his mess… with deadly results.

RELATED: The Byrdes Are ‘All In’ For ‘Ozark’ Season 3 In Announcement Teaser

“It was a perfectly devised tragedy and unfortunately because of the characteristics of everyone involved, the end is inevitable,” offers Pelphrey. “It’s tragic because a lot of people were trying their best to have a different outcome, but it sort of can’t be. I thought the writers did a heartbreakingly good job of honouring what Ben might be doing and why he might be doing it. At the same time, as the audience, we sort of realize that he’s putting so many lives in danger. Wendy doesn’t have much of a choice. Or, I should say, she’s being forced to choose between her brother and her children and herself.” 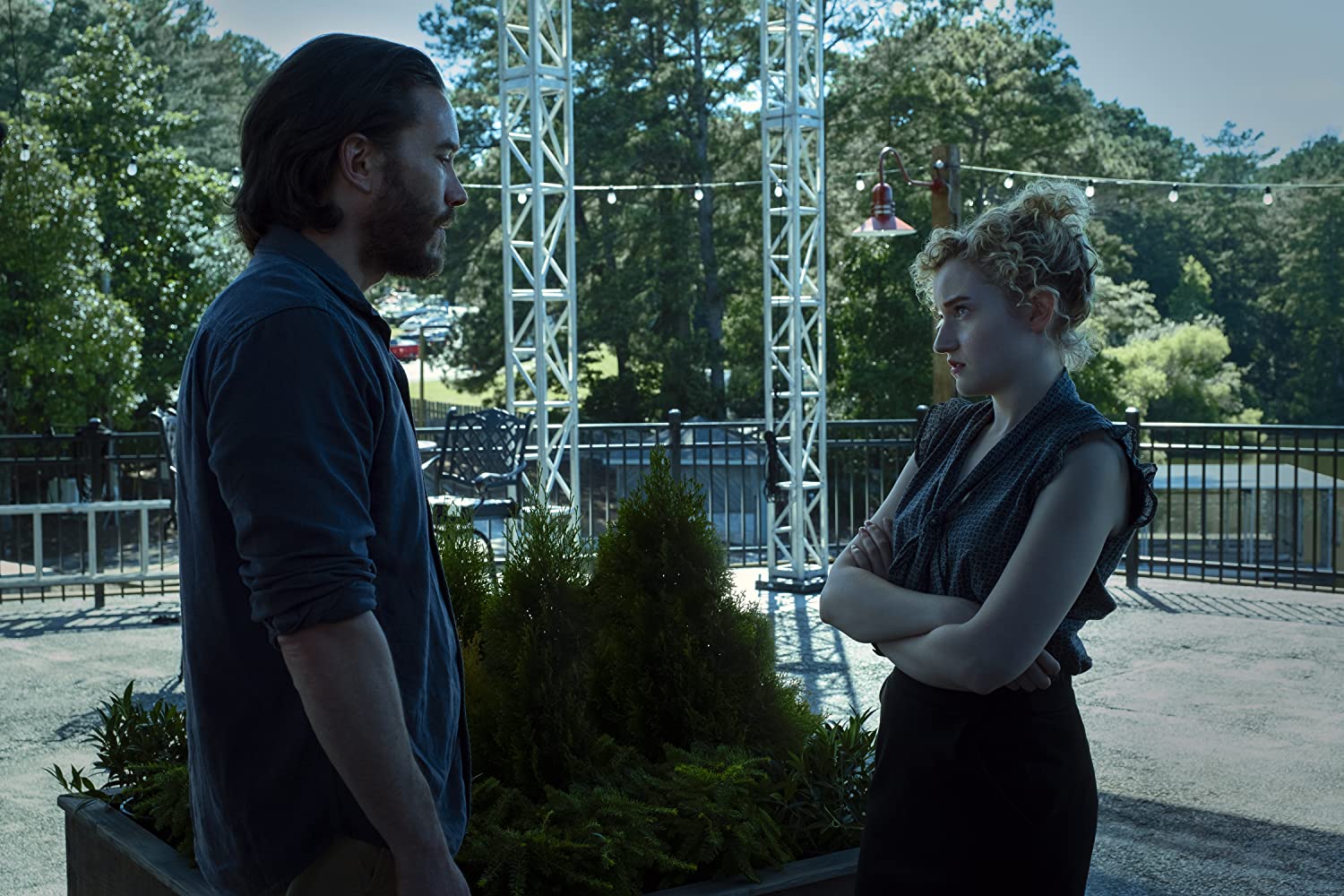 Before Ben meets his fate, he shared some touching moments with Wendy. However, it’s when Ben emotionally breaks down that Pelphrey truly shines. The actor maintains tapping into that type of vulnerability, take after take, is never easy.

“It’s always a bit of a mystery, but, yes, I felt open,” says Pelphrey about shooting those types of sequences. “I felt like a lot of it was giving myself over to the writing. I don’t know how to eloquently speak to that. That kind of process, and those kinds of scenes, I sometimes don’t fully understand what’s happening and I guess I don’t really want to.”

“I will say there are certain environments in which it is easier, certain environments are more conducive to that kind of work,” he continues. “‘Ozark’ was a very special job, in that sense. They have cultivated a very, very safe, positive, supportive environment. Any day at work where there were scenes that were intense, I felt very supported and at ease, which goes a long way to making those scenes more possible.”

Pelphrey has already accomplished quite a bit during his colourful career. The New Jersey native won a Daytime Emmy Award for Outstanding Young Actor for “Guiding Light”. He followed that gig up with a run on “As the World Turns”. He’s received praise for his time on “Banshee” and “Ozark”. And, “Iron Fist” allowed Pelphrey to visit the ever-expanding Marvel Cinematic Universe. So, what’s next for the talented performer? What kind of roles would he like to play?

“I don’t know,” Pelphrey says. “I don’t know if I’ve ever thought of it in terms of daydreaming on any one specific thing or one specific role. I’m excited to continue to get to read great scripts. I feel like if there is any way that I’m mostly making any kind of decisions or being moved by anything, it is the writing.”

“There are so many writers out there,” he concludes. “I look forward to feeling like you get to be a part of something that you think is beautiful, honest or brave. I got to feel all those things about ‘Ozark’.”