‘Modern Family’ Series Finale Is A Heartfelt Group Hug: Here’s Where Everyone Ended Up

“Modern Family” signed off on Wednesday, coming to an end after 11 seasons of laughs and love as one of television’s most watched and acclaimed family sitcoms of the last decade.

Throughout the years, fans have watched the extended Pritchett-Delgado-Dunphy-Tucker clans through ups and downs, births and deaths, triumphs and heartbreak, from Cam (Eric Stonestreet) and Mitchell (Jesse Tyler Ferguson) adopting daughter Lily (now played by Aubrey Anderson-Emmons) in the series premiere to Haley (Sarah Hyland) welcoming the next generation, twins George and Poppy, at the end of season 10.

“Modern Family” wrapped up with an hour-long documentary retrospective, followed by their two-part finale episode, which saw the family reminiscing about fond memories and looking forward to new normals as they all entered uncharted new chapters of their lives.

So, where did everyone end up in the final moments of “Modern Family”? Here’s a family-by-family breakdown of what happened in the brood’s big finale. 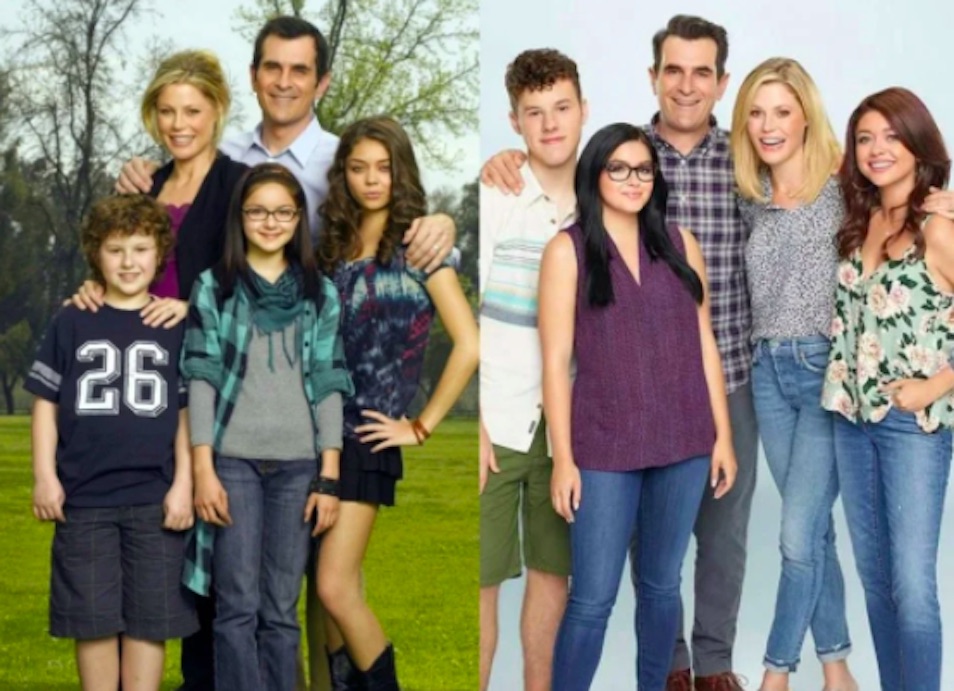 After first feeling overwhelmed by having all of their kids — plus Dylan (Reid Ewing) and Haley’s twins — back at home, Phil (Ty Burrell) and Claire (Julie Bowen) were surprised by their sadness when all three kids announced that they’d be moving out: Haley and Dylan to an apartment of their own, Alex (Ariel Winter) to Switzerland for a new job opportunity and Luke (Nolan Gould) to the University of Oregon.

“They’re really leaving,” Claire said, growing emotional as the pair looked around their emptying house. “What do we do?”

“What people have always done,” Phil assured her. “Leave the porch light on. They’ll come back.”

After moving into their dream house and adopting a baby boy, whom they named Rexford, after their perfect new street, Mitchell and Cam were uprooted once again when Cam got his dream job as the head coach of the Missouri State college football team. After several delays and several attempts at an emotional family farewell — “Both of my sons are leaving,” Jay (Ed O’Neill) remarked, bringing everyone to tears — the new family of four finally set off on their new adventure, but not before one of Mitchell and Claire’s long-standing spats came to a sweet conclusion.

“I put the skating trophy in your suitcase,” Claire told her brother. “I want you to have it first, so that I know you’ll come back.”

Gloria (Sophia Vergara) was in a sad slump, feeling like she wasn’t needed around the house after going back to work, but Jay assured her that it was her turn to be selfish in pursuit of her professional dreams. Even sweeter, he boosted her spirits over Manny (Rico Rodriguez) leaving to perform on a cruise ship by revealing he had been learning Spanish in order to accompany her and Joe (Jeremy Maguire) on their trip to see her family in Colombia over the summer.

And, fittingly, it was the family patriarch who delivered one last voiceover as the family took a group photo and said their ultimate goodbyes.

“Life is full of change — some big, some small,” Jay mused. “I learned a long time ago, you can fight it, or you can try to make the best of it. And that’s all a lot easier if you’ve got people who love you, helping you face whatever life throws at you. At least, that’s what helps me sleep at night.”

Following the series finale, some of the show’s celebrity fans shared their reactions.

Congrats to all my #ModernFamily friends on the completion of their 11 year journey. So honored to have been a small part of such a wonderful series & so sad to see this incredible family leave us. Thank you to the incredible cast and crew for your tremendous work! pic.twitter.com/DKfOpFI3IU

Congratulations to the cast, writers, producers and crew of #ModernFamily on one of the best TV shows ever

Members of the cast also commented on social media:

Just like that, it’s over.
This family changed me forever.
Until next time… x #ModernFamilyFinale pic.twitter.com/zFRS9AhWUa

I will love my american family forever❤️❤️❤️❤️

See more from the final season of “Modern Family” in the video below.