Josh Brolin Apologizes For Breaking Quarantine To Visit His Parents, Admits ‘It Was Irresponsible’

Josh Brolin is admitting he’s “humbled” after he was hit with backlash over some photos he shared on social media in which he and his family paid a visit to his father, actor James Brolin, and wife Barbra Streisand.

In the photos, which he has since taken down, the extended family was gathered together next to his parents’ swimming pool. While everyone is wearing a mask and maintaining distance, he was roundly criticized for doing exactly what people are being warned not to do while self-quarantining.

Brolin shared a video on Instagram on Sunday, admitting to a lapse in judgement.

As Brolin explained, he and wife Kathryn Boyd had a plan to go visit while remaining outside the house and communicating outside a window. Unfortunately, once they arrived that plan went out the window.

“My father lives next door to us, and we had a plan to go see them and not be near them and that plan was broken and that’s our responsibility. We were going to pick something up and show [his daughter] the pool because we don’t have a pool and yeah, I think it was irresponsible,” he admitted.

While Brolin took down his photos of the visit, the Daily Mail captured a screenshot, while Streisand posted some of her own. 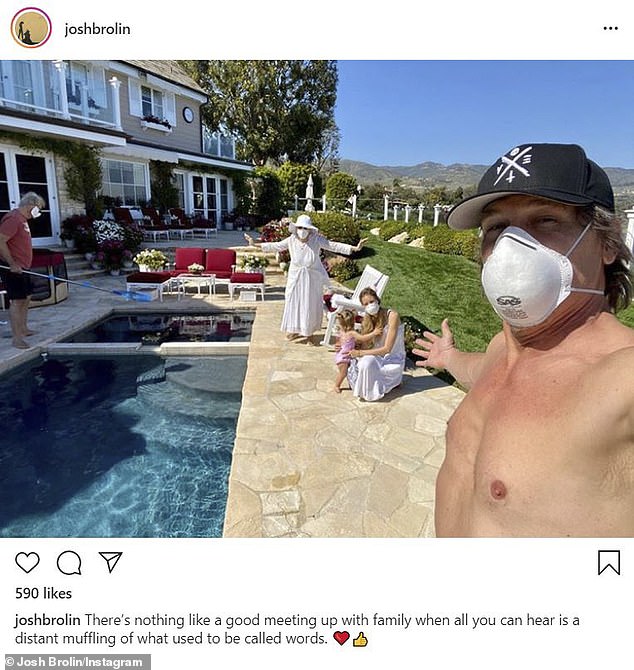 I just love the sign that Josh and Kathryn painted yesterday when they came to see us with our little grandchild Westlyn! P.S. all of the flowers are now blooming on our wishing well — we are wishing with our hearts and minds for everybody to stay well!

Offering his apologies, Brolin insisted that it’s important to follow all safety measures, “even if we go overboard.”

He concluded by thanking his followers for calling him out. “I’m thankful to be reminded, as it is extremely important to me, and I do care about my fellow man… so thank you, guys.””