Nick Carter On The ‘Blessing’ Of Being A Girl Dad, Therapy In Quarantine & ‘Masked Singer’ Rumours (Exclusive)

Having spent his childhood performing and entire teenage and adult life on the road with the Backstreet Boys, Nick Carter admits the sudden halt to touring and extended period of domestic bliss instigated by the coronavirus pandemic has been mentally and physically challenging. But the 40-year-old musician is treasuring the situation’s “silver lining” – extra time with his gorgeous family and the dream baby girl he and his wife, Lauren Kitt Carter, fought so hard for.

“I have a baby daughter who I would’ve been away from right now and she’s starting to crawl and stand up,” Carter tells ET Canada, in-between crawling after seven-month-old Saoirse and helping 4-year-old son, Odin, with home-schooling. “It’s a double-edged sword because I’d love to be touring, but I’m making the best out of what we have right now – playing with my children, getting involved in schooling and just being in their lives in a full-time capacity. It’s a lot of work, but it’s great work.”

It’s hardly surprising Carter is relishing every moment with his children at home in Las Vegas. In December, he and Lauren, 36, opened up to ET Canada about the pregnancy struggles and miscarriage heartache they faced before welcoming Saoirse. Five months on, Carter still sees the adorable girl as a “miracle.” 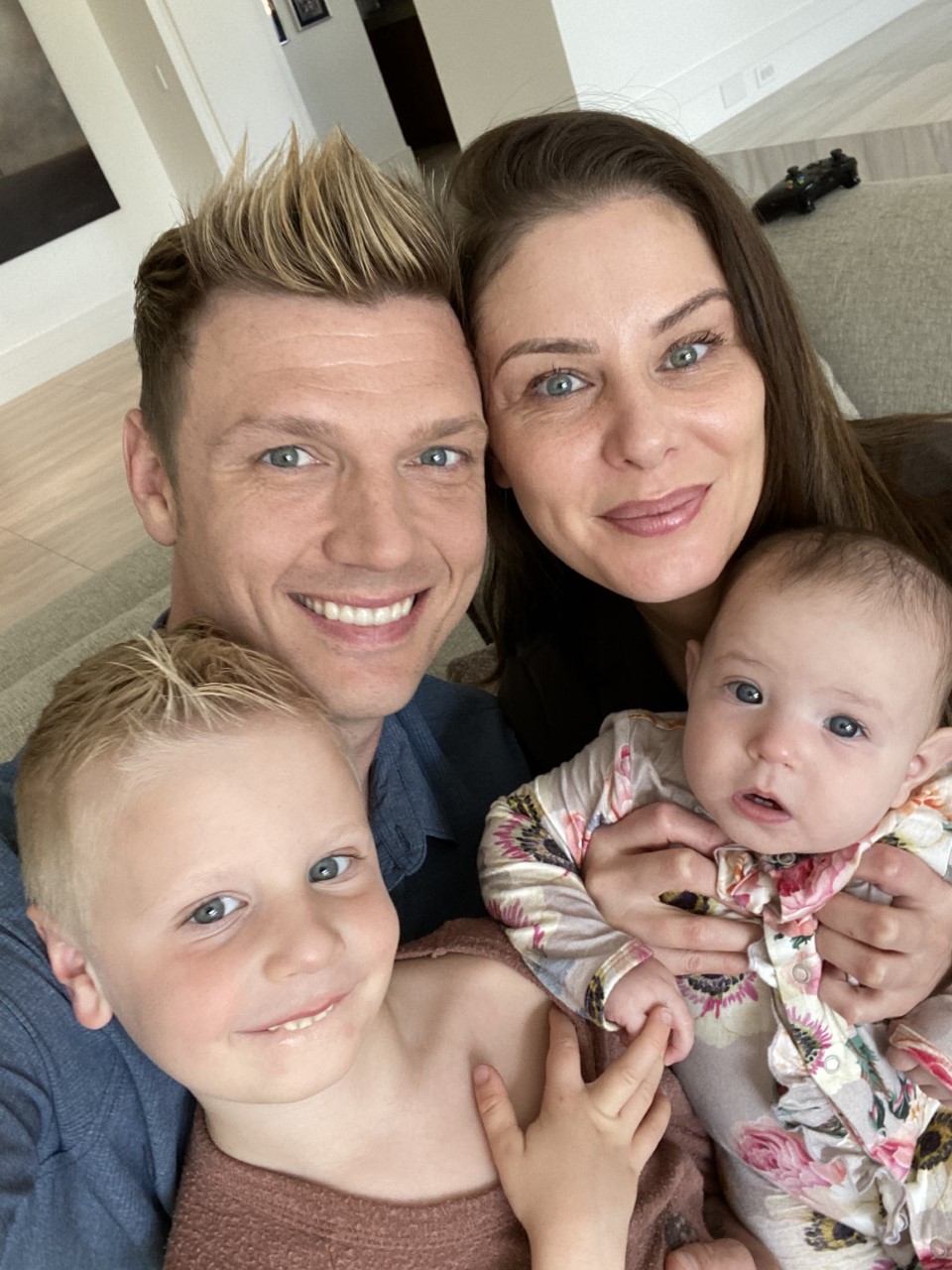 RELATED: Lil Uzi Vert Samples The Backstreet Boys For New Track ‘That Way’ And Nick Carter Is A Huge Fan

“There was a point when we lost our second child – a girl – and we were quite far along in the pregnancy and Lauren was just [distraught,]” he says. “It was one of the most horrible things to ever go through – driving her to the hospital, being with her through everything there, then all the emotions that came afterwards. It was extremely hard, to the point where she wanted to give up on ever trying again. We wanted a girl and just didn’t know if we’d get one and when we did, it was a miracle from God above.”

“We know it doesn’t happen for everyone, so we understand how important it is to be grateful,” he continues. “When we got our girl, I never realized how connected I could be with a human being, let alone my child. You hear stories, but experiencing it first hand – the way she smiles at me, the way she wants to be held all the time – I love it. It’s everything I wanted and more, so I’m appreciative to have come out the other end. Being a girl dad is blessing I’m very grateful for.”

Carter remains just as smitten with his daddy’s boy, Odin, who’s currently being home-schooled via video lessons – which naturally comes with some hiccups. “He gets the wiggles,” laughs Carter, who’s also having Transformers and Ghostbusters-themed fun with Odin to make up for his lack of social interaction with other youngsters. “We’ve got to let him run around outside and give him breaks now and then.”

It’s always Halloween at our house ☺️I literally grew up on the #realghostbusters and it’s crazy how he loves it. I like to say he’s classically trained when it comes to cartoons. He’s totally gonna be prepared when the movie comes out. #ghostbusters #ghostbusters3

Odin isn’t the only one needing regular fresh air during quarantine. Carter admits the extreme transition from his decades-long, fast-paced, globe-trekking life as a Backstreet Boy, to the comparatively quiet stillness of an extended period at home has been somewhat of a shock to the system.

“Quarantine’s really interesting from a touring artist perspective,” he says. “I love performing and entertaining people. We’ve been touring for years, anywhere from 150-200 days-per-year, so I’m used to being go-go-go and have had to learn a new way of life.”

“It’s definitely different and I’m doing some therapy with my therapist over Zoom because my body is set in adrenaline mode since we’re always going places,” Carter continues. “I’m having to readjust psychologically – tone myself down and normalize myself. I’m not complaining because I’m very happy to be home and in a routine with my family, but there’s definitely some getting used to with being in one place for a long time.”

As well as virtual therapy sessions to help him stay mentally healthy, Carter has been taking family walks, eating well, reading Mark Manson’s Everything is F*cked and endeavouring to get adequate sleep – although he wakes around 5 a.m. with Saoirse, relishing breakfast duty with her and Odin. He and Lauren, who owns cosmetic and regenerative dermatology clinic ProDerm Image, have also been keeping fit sparring with one another during garage boxing bouts.

Carter’s also doing what he can to help others through these trying times. He recently brightened the days of patients at the Children’s National Hospital (getting an epic surprise in return) and also partnered with VOSS to help deliver over 2000 water bottles to frontline workers at Mount Sinai Brooklyn hospital.

Next, the “Dead 7″ filmmaker is joining a rising celebrity quarantine trend – doing readings online – after a post about how much Saoirse loves Happy Baby Organics’ teething wafers caught the attention of the company. They offered to donate 10,000 products to Las Vegas shelter The Shade Tree and food bank Three Square once he does a virtual reading of A Happy Day at the Farm. “I’m finding creative ways to give back, whether it’s through social media or partnering with different organizations,” he says.

And, although he’s taking a break from professional ventures like an upcoming solo album, Carter’s excited to resume such endeavours when he can, along with his Backstreet Boys commitments. Speaking to ET Canada on what should have been the eve of the quintet’s New Zealand/Australian DNA World Tour run, he says postponing was the “right thing to do.”

A second round of Canadian dates scheduled for August and September meanwhile remains up in the air. “As every day goes by, we’re getting information here and there, but there are no official updates yet,” he says.

#happymothersday to my darling wife @laurenkittcarter thank you so much for giving us these two beautiful children. I love you. #happyfamily ❤️❤️❤️

While fans await tour updates, they can tune into Wednesday’s The Masked Singer finale to find out if judge Nicole Scherzinger – and many viewers – are right about Carter being the mystery musician behind the turtle costume. “It’s an incredible show and you never know,” he teases. “That’s all I’ll say. You never know who that guy might be!”