Hannah Brown found herself engulfed in controversy after sharing a video on social media in which she sings a rap song — and uses the N-word while doing it.

As Us Weekly reports, the former “Bachelorette” star was captured using the word while singing DaBaby’s “Rockstar” on Instagram Live.

Brown glossed over it until she began seeing comments on her feed calling her out for using the word —which she initially said she hadn’t even realized using.

She later reiterated her claim that she never used it — despite the fact she can be clearly heard singing the word in the video.

“I’d never use that word. I’ve never called anybody that. We don’t say that word,” she added. “So, you know what, I’m going to stay here, and y’all can think I said whatever I did or think I’m something I’m not, but I’m not that.”

She then offered a halfhearted apology. “Look, people are going to want to think whatever they want to think of me, get mad at me, whatever,” she said. “And even if I did accidentally say it, I’m very sorry, I was singing a song and not even thinking.”

Many people didn’t find that to be enough of an apology, and let her know via social media — including fellow Bachelor Nation alum Beckah Martinez, who took Brown to task on her Instagram Stories.

“You can’t say the N-word just because black people say it. Black people reclaimed the use of a word that was used for centuries to oppress and dehumanize them,” she wrote. “It’s a word that holds so much historical weight that the black community is still healing from and parts of the white community are still weaponizing for dehumanization, particularly in the south. so no, it’s not cool to just sing it along the lyrics of a song especially not on your platform with millions of followers?!! It’s 2020. at least make a legitimate apology and acknowledge your behaviour.”

She added: “We’ve got to hold people accountable to do better otherwise we’re continuing to prioritize the feelings of white people (and someone we ‘stan’) over ending our country’s loooong history of casual racism and flippant anti-blackness.”

Brown finally apologized, sharing on her Instagram Stories, “I owe you all a major apology. There is no excuse and I will not justify what I said. I have read your messages and seen the hurt I have caused. I own it all. I am terribly sorry and know that whether in public or private, this language is unacceptable. I promise to do better.” 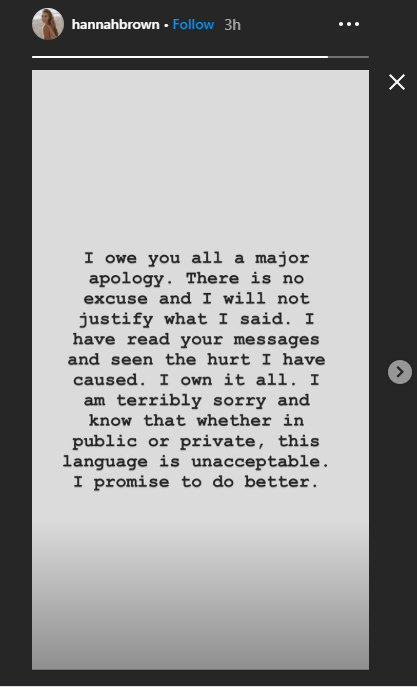 Despite her apology, former “Bachelorette” Rachel Lindsay was not impressed.

“It’s easy to make a statement. It’s easy to hide behind words, but when you’re bold enough to say the N-word on camera, on your platform… then you need to bold enough to use your face on camera and apologize in the same way you said the word,” Lindsay said on her Instagram Live.

She continued, “We can’t give people a pass for this. We have to hold people accountable for what they’re doing. You should feel disgusted when you say that word. You should feel uncomfortable.”

Lindsay, who made history as the first black “Bachelorette” added, “That word has so much weight and history behind it. If you don’t know, please do yourself a favor and educate yourself on that word.”

“That word was used to make black people feel less than… and every time you use that word and you’re not black, you give that word power, and that is why it is wrong,” she said. “Non-black people should not feel OK about saying the word n*****. It’s wrong.”

so just watched that “apology” and the friend next to her rly threw out another friend’s name and the name of Hannah’s brother. like girl wth you were the ONLY visible and audible person in that video.

I was a big fan of Bachelorette/DWTS Winner Hannah Brown, until she decided to drop a hard N word in a rap song and then smirk and laugh through an “apology”. HB, you’re done in my book! Now considered irrelevant. @hannahbrown

I’m disappointed in @hannahbrown for singing the n word – even in a song. As a woman of color & a Christian, I’ve done my best work to not stereotype white, southern, religious women who do pageants as racist as I’ve experienced them. Come on Hannah B.

not Hannah Brown saying the n-word …yikes not ok pic.twitter.com/7z8QFhzSgD

I pretty much have a degree in being drunk. Hannah Brown saying the n-word while singing drunk is NO excuse. She should know better. Period ✌ #BachelorNation

hannah brown saying the n word is inexcusable. and if any bachelor/dwts fans are defending her, you are part of the problem.🤭

Are we really surprised that Alabama Hannah Brown says the n-word? Because I’m not pic.twitter.com/22kyHmle69