The actress, 24, responded to Kloss’ post of a print made by author and artist Cleo Wade.

Part of the quote reads, “The world will say to you: We need to end racism. Start by healing it in your own family.”

RELATED: Karlie Kloss Opens Up About Marrying Joshua Kushner Despite The ‘Complications That Came With It’

Thank you @cleowade for the reminder to live by these principles, we needed this today ❤️ Proceeds from these prints will go to The Antiracist Research & Policy Center: www.withlovecleo.com

Gevison took umbrage with the model’s post in light of her marriage to Joshua Kushner, the brother to Ivanka Trump’s husband Jared Kushner.

“Karlie, give it a rest,” Gevinson hit back in the Comments section.

RELATED: Karlie Kloss Talks Politics, Discusses Being A Part Of The Kushner Family, And That Viral ‘Project Runway’ Moment 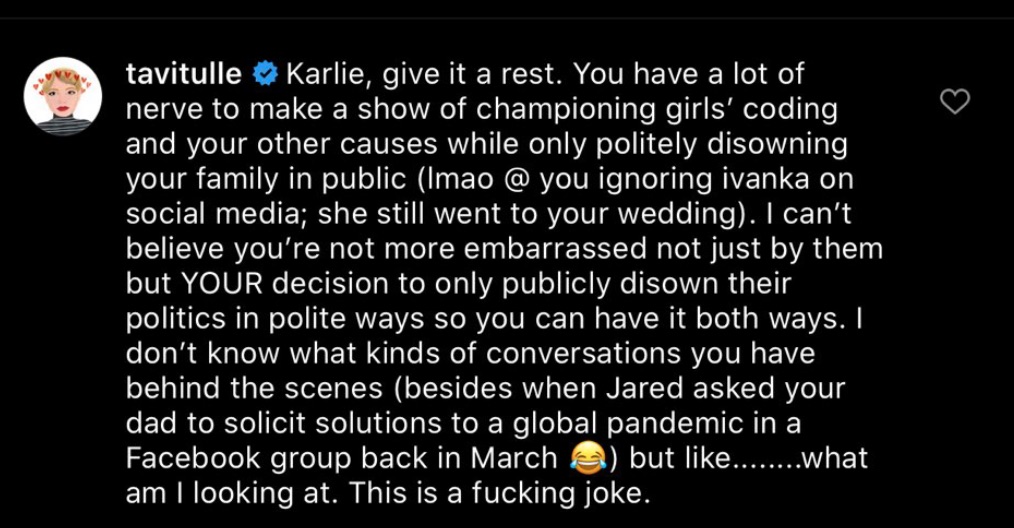 Kloss does not take well to her husband and extended family being mentioned. During the last season of “Project Runway”, a contestant threw a jab at Kloss about having “lunch with the Kushners.”

one of the #ProjectRunway designers invoked "The Kushners" last night while defending his design and this is the face Karlie Kloss made.

He was then eliminated from the show pic.twitter.com/KefAGTV0v5