Sia Apologizes After Confusing Cardi B For Nicki Minaj: ‘Can I Just Like You Both?’

Sia is offering an apology to Cardi B and Nicki Minaj, admitting to “making a buffoon out of myself.”

It all began when a fan tagged the “Chandelier” singer on Twitter, sharing a photo of Nicki Minaj and asking about when the two might collaborate on a song. 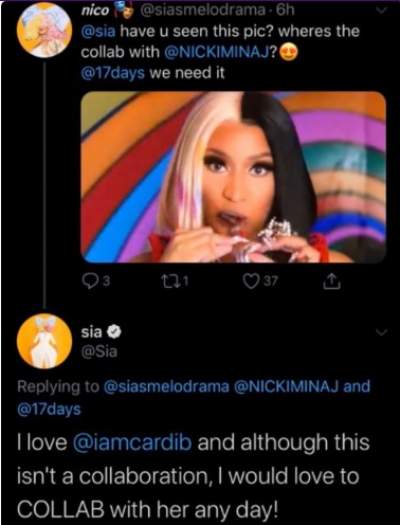 Sia was apparently confused when she mistakenly identified Minaj with a different Black female rapper, declaring she would “love to COLLAB” with Cardi B.

I love @iamcardib and although this isn't a collaboration, I would love to COLLAB with her any day!

It didn’t take long for the Twitterverse to take notice and chime in, with Minaj’s fans taking offence to the tweet while pointing out her onetime feud with Cardi B. Some, in fact, accused Sia of trying to reignite their feud.

She replied in a since-deleted tweet, writing:  “I don’t give a s**t about feuds, George Floyd was f**king murdered. Breonna Taylor. Murdered. Come on let’s rise in unity. You think @iamcardib and Nikki [sic] are so petty that they would want you focusing on a silly feud instead of REAL NEWS.”

At some point, Sia realized that she had mixed them up, tweeting, “My f**k up @NickiMinaj” (that tweet was also subsequently deleted).

She followed up with another since-deleted tweet: “Hey @iamcardib @NICKIMINAJ you aren’t thinking about a feud right now are you? We are focused on the problem of systemic racism.”

After wiping out those earlier tweets, Sia issued one more, this time an apology.

“I totally misunderstood a tweet earlier that has resulted in me making a buffoon out of myself,” she wrote. “Sorry @NICKIMINAJ and @iamcardib if you hear about it. Can I just like you both?”

I totally misunderstood a tweet earlier that has resulted in me making a buffoon out of myself.
Sorry @NICKIMINAJ and @iamcardib if you hear about it.
Can I just like you both?

Neither Minaj nor Cardi have yet to respond to Sia’s mix-up and subsequent apology.