“Song of the South” is being relegated to history and “The Princess of the Frog” is the future, as Disneyland Resort announced that Splash Mountain will soon be “completely reimagined” with Princess Tiana at its centre. Zip-a-dee-doo-dah, zip-a-dee-finally.

The flume ride, which has long been a staple of Disneyland in California and the Magic Kingdom in Florida, will now become a Louisiana bayou adventure following Princess Tiana (voiced by Anika Noni Rose) and Louis (Michael-Leon Wooley) as they prepare for a Mardi Gras performance.

“The Imagineers are giving us ‘The Princess and the Frog’ Mardi Gras celebration we’ve been waiting for, and I’m here for it!” Rose said, promising fans will be “over the moon.”

Check out the official concept art for the redesign: 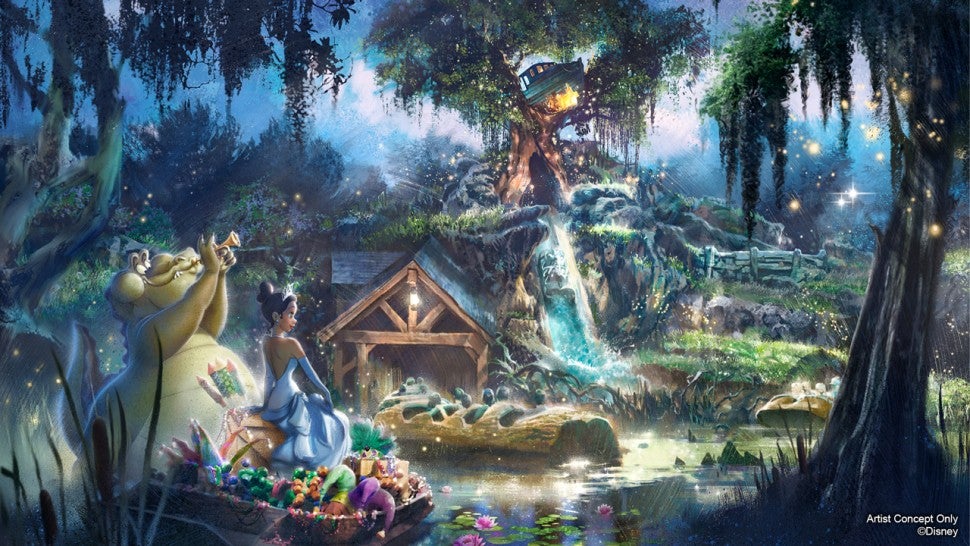 Though Disney does not explicitly address why the change is taking place in its release, it comes after a petition called for the company to retheme the ride, explaining that the attraction is “steeped in extremely problematic and stereotypical racist tropes” from the 1946 film “Song of the South”.

(Of note, “Song of the South” had previously been locked away in the Disney vault, never released on home video in the U.S. and not available on Disney+.)

“With this longstanding history of updating attractions and adding new magic, the retheming of Splash Mountain is of particular importance today,” Disney’s statement reads. “The new concept is inclusive — one that all of our guests can connect with and be inspired by, and it speaks to the diversity of the millions of people who visit our parks each year.”

No word yet on when the redesign will be completed, but Disney previously announced that park-goers will have to wait a bit longer to return to the “Happiest Place on Earth” amid the ongoing coronavirus pandemic. Though the park was set to reopen on July 17, it has been delayed to a TBD date.

Following Disney’s announcement, the star of “The Princess And The Frog” reacted to the news:

Good morning, and some good, fun news! Lead by Imagineer, Charita Carter, Splash Mountain is going to be reimagined as a Princess and the Frog ride!! •👑• "It is really exciting to know that Princess Tiana's presence in both Disneyland and Magic Kingdom will finally be fully realized! As passionate as I am about what we created, I know the fans are going to be over the moon. The Imagineers are giving us the Princess & The Frog Mardi Gras celebration we've been waiting for, and I'm here for it!" ~Anika Noni Rose/ Princess Tiana👸🏽💚 •👑• 👸🏽💚🎢👸🏽💚🎢👸🏽💚🎢👸🏽💚🎢👸🏽💚 #PrincessTiana #DisneyPrincess #SplashMountain #DisneyParks #DisneyAnimation #WaltDisney #DisneyWorld #DisneyLand

In a statement, Jenifer Lewis, who voiced of Mama Odie, said: “Voicing Mama Odie was a joyful creative experience. Recording Mama Odie’s song, ‘Dig a Little Deeper’, by Randy Newman, must have taken a hundred takes, because I wanted it to be perfect,” she said. “The image of Mama Odie, in the fairy godmother role, truly reflected the New Orleans Black bayou tradition of the revered wise woman. I am thrilled that ‘The Princess and The Frog’ is being honoured for the joy it has brought to millions of Disney fans.”

Coronavirus Reopenings: When Disneyland, Professional Sports and More Will Be Back

The Best Movies to Watch on Disney Plus