‘SportsCentre’ Host Dan O’Toole Confirms His Daughter Has Been Found

“My baby Oakland. I’m praying that whoever has you, is holding you,” he wrote. “That whoever has taken you from me, is protecting you. That however has you, let’s you come back into my arms. I love you Oakland. I can’t wait to one day hold you again. My heart is broken. I am broken. To be clear, Oakland is alive, we think. But we don’t know. I have a one month old child, and I don’t know where she is.”

He later updated his status, adding “my amazing ex wife Corrie has NOTHING to do with this. Please leave her alone.”

Global News confirmed with Durham police a few hours after O’Toole’s post that the baby “has been located with her mother and is safe. There are no concerns for child’s safety at this point.”

#BREAKING: I have confirmed with @DRPS that @tsnotoole's baby has been located with her mother and is safe. There are no concerns for child's safety at this point.

O’Toole confirmed that his baby was found, but has yet to see her.

I just hope that you never have to look in the eyes of your own children, and tell them that you don’t know where their sister is, or when they will ever see her again. I am still broken. I don’t know if any of us will ever be fixed. We just want our Oakland back.

O’Toole welcomed his daughter at the end of May. He also has two other daughters.

When you self isolate long enough, you get one of these as a door prize!! Meet Oakland Eleanor Sandra Newman-O’Toole. My brand new lil girl who has a million names, and all of my heart. In case it was ever in doubt, now officially NEVER forgetting 2020.

While O’Toole’s comments were turned off, Brett Kissel was able to respond, sending their “deepest sympathies”. 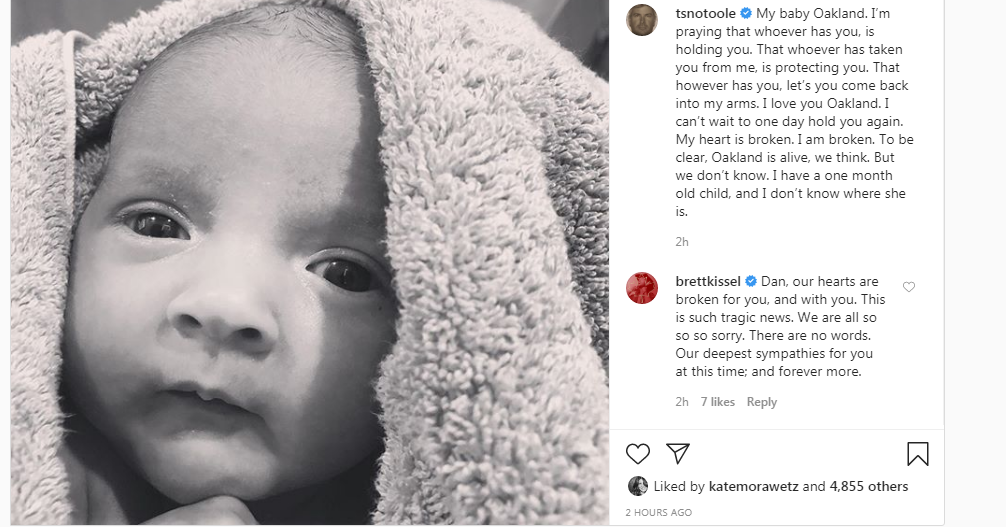 Friends and colleagues for O’Toole also shared their support:

Absolutely heartbroken for ⁦@tsnotoole⁩ who posted this about an hour ago on his Instagram. His one month old daughter Oakland is missing.

Please keep Dan and his family in your thoughts, and for the safe return of Oakland to her parents. pic.twitter.com/lZK94FLfIV

I'm currently sitting on the couch, holding my daughter and crying thinking about Dan O'Toole and his baby.

I hope this nightmare is over for him soon.