Will Smith isn’t here for jokes about Jada Pinkett Smith‘s “entanglement” with August Alsina. On Wednesday, the actor took to Instagram to share a playful video of himself jumping rope. By attaching a camera to the rope, Smith showed fans its perspective while he jumped, causing many fans to marvel at the cool clip.

One follower, however, found the opportunity to make a clever comment about Pinkett Smith’s recent relationship reveal. “Ok don’t get entangled,” they wrote, adding a laughing-crying emoji.

Smith reacted to the comment, admitting it was funny, but not tolerated on his page. “Hahaha… Okay… I can admit it. That’s Funny! I’m definitely gonna block you. But the joke was Very Funny!” he said.

Next time I’m gonna do it wearing a Kilt⁣ ⁣ Shoutout @iamjesserichards for the inspo! 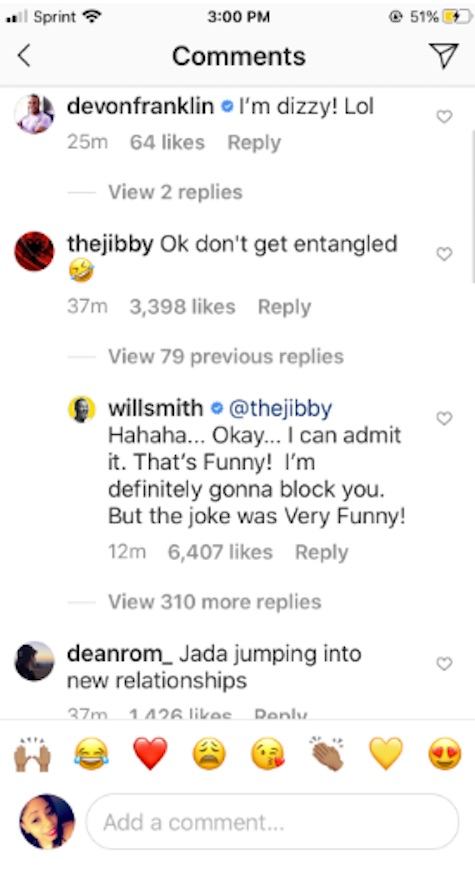 Alsina first opened up about his romance with Pinkett Smith during an interview with radio personality Angela Yee last month; he claimed at the time that Smith gave him his blessing. Pinkett Smith acknowledged her past relationship with Alsina on her show, “Red Table Talk”, on July 10, having a candid conversation with Smith about their past separation.

It was Pinkett Smith who first referred to her romance with Alsina as an “entanglement,” before Smith pushed her to acknowledge it was a relationship. The actress rejected Alsina’s statement that Smith gave him his permission, noting that only she could give herself permission in this particular situation.

In a recent interview with ET, Nia Long weighed in on the Smiths’ situation. “I feel bad for Will and Jada right now, because they’ve been extremely vulnerable with their personal story. And it takes a lot of courage to do that,” Long said.

“When you have a show like “Red Table Talk”, you want to be what you are sharing with the world, and that’s gotta be a tremendous amount of pressure,” Long explained. “We all have our ups and downs with love. Love is a complicated thing.”

Long said that Smith is “an icon in our community” and said she wishes the public would “back off and leave them alone.”

“I think any key to any relationship is, give your partner the room to be who he needs to be, who she needs to be, and if it means you’re taking a break to do that? Take the break!” she shared. “I know I sometimes just leave the house and I don’t tell anyone where I’m going and I’m like, OK guys I’ll be back. Because I’ve learned that if I don’t take care of myself first, nothing else in the house runs smoothly.”