Summer is in full swing and the stars are baring all to get some sun! Cameron Diaz, Kate Upton and Leslie Mann share their enviable assets on set of their new film The Other Woman. The film is about a woman who finds out she’s not the only other woman in her married boyfriend’s life and teams up with his wife for revenge. But with bodies like those, it’s hard to believe that these ladies – or the characters they play – would have any trouble keeping relationships.

Rihanna isn’t shy about posting her bangin’ bod on her Instagram feed, but really made heads turn when she showed off her abs in this Roberto Cavalli crop top.

Documenting her crazy family vacation, Julianne Hough shows off what her mama gave her! Watch the dancer hold on for dear life when she tackles a tree swing in the Insta-vid below!

Meanwhile, Nicole Richie takes a moment to reflect when she snapped this pic, relaxing on vacation in Europe with her adorable mini-me Harlow.

Now this isn’t just a tally of beach beauties, the guys are giving away tickets to the gun show left, right and centre!

Case-in-point, Harry Shum Jr. – who knew the Glee star was hiding this ripped bod under his letterman jacket?

If there’s one thing we can’t get enough of it’s hot dads with their adorable children. Orlando Bloom shows off his pipes while showing some “aww-worthy”; affection to his baby boy Fynn. 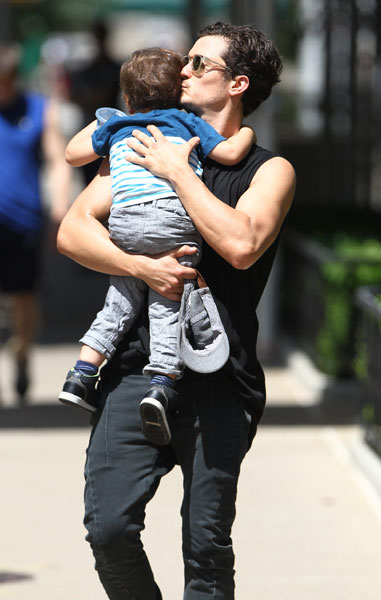 Now, if you’re looking for a way to spend some time with these Hollywood hunks, you’re in luck! Hugh Jackman is well, jacked, in his new film The Wolverine. The Australian actor tweeted out this still, ensuring that ladies everywhere will be eager to join their guys at the movies this weekend.

The one I’ve wanted to deliver since putting on the claws 13 years ago. #THEWolverine pic.twitter.com/6RYjKV8xXH

Famous for his marvellous six pack, Usher gives fans a little taste of his workout routine with this Twitpic.

And who can forget? David Beckham once again brought the smoulder to his latest fragrance ad, shedding some clothes and giving one heck of a “blue steel”; in the video below!