A live benefit table read of the classic Amy Heckerling comedy is back and can be watched here. 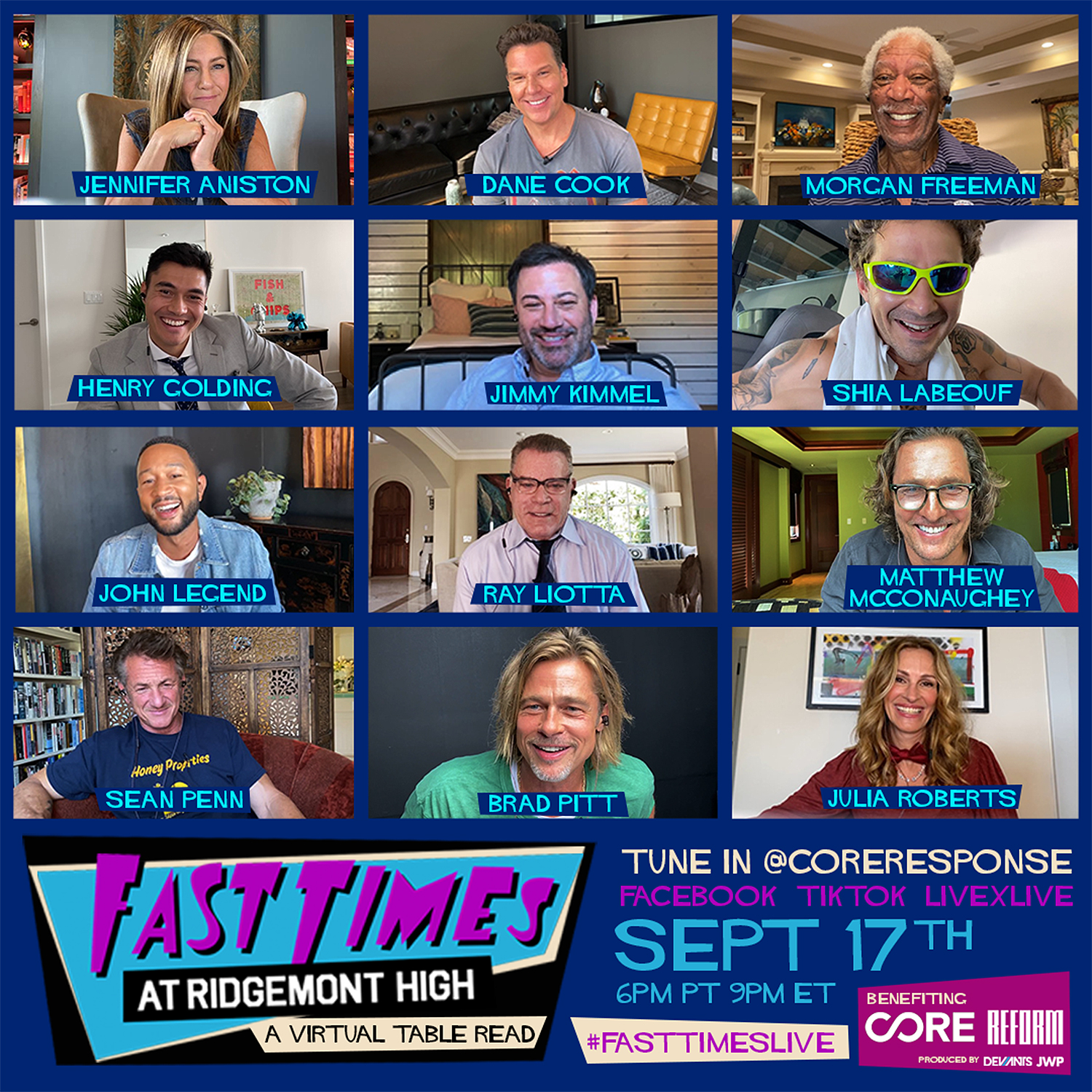 And the promised part of having Aniston and Pitt on screen at the same time did not disappoint.

The event had previously been scheduled for August 21 but technical difficulties forced it to be postponed.

In a statement about the postponement, Cook said: “We want to deliver the absolute best night of entertainment possible and raise money for two incredible organizations. The technical issues were insurmountable. Class will be back in session soon!!”

Presented by Cook, proceeds from the live-read will go toward Sean Penn’s non-profit CORE, which is fighting on the frontlines against COVID-19, as well as the REFORM Alliance’s efforts to reform the criminal justice system.

Cook and Penn will both take part in the table read, along with Jennifer Aniston, Brad Pitt, Freeman, Henry Golding, Shia LaBeouf, Matthew McConaughey, Julia Roberts, and Jimmy Kimmel. On Thursday, it was revealed that John Legend and Ray Liotta would round out the cast.

Many fans are excited to see ex-married couple Pitt and Aniston virtually together.

“I was once asked if, as a comedian, I’d ever dreamed of hosting the Academy Awards,” Cook said in a statement. “My response, ‘It’d be fun but more than that I’ve always imagined being on a group webcam chat with some of the greatest actors working today, sitting in our pyjamas reading a legendary script from 1982.’ Kaboom!”

Heckerling and screenwriter Cameron Crowe will both be on hand to introduce the event.

“I’m honoured that so many talented, wonderful people are willing to get together to celebrate our movie, and to create their own special version of it,” Heckerling said.
“And I’m a huge fan of Sean. He has such a big heart and I fully support CORE and all of his causes.”

Crowe added, “Sean brought magic to us on day one, and he is still bringing that magic to the world. We are so excited to be a part of this 2020 take on Fast Times at Ridgemont High. Thank you to this cast, and to Sean, for always honouring the best things in life, love and creativity. It is, as a great man once said, totally awesome.”

Fans loved every moment, including LaBeouf who really got into character.

Annnnd there was just a love scene between Brad and Jen’s characters. It was delightfully awkward and ironic and weirdly sweet. I LIVE. #FastTimesLive

This live table read of Fast Times at Ridgemont High is off the freaking chain!! And Shia LaBeouf as Spicoli is pee in the pants Hysterical!! pic.twitter.com/MSiekH40Kq

SCREAMING at the Fast Times at Ridgemont High table read. Shia LaBeouf is doing it from the drivers seat of a pickup truck. Sean Penn is vaping and unable to control his laughter. MORGAN FREEMAN IS NARRATING.

Shia LaBeouf might be on for an Oscar for the Fast Times at Ridgemont High table read.

Jennifer Aniston teaching Julia Roberts how to give a blow job.

Matthew McConaughey giving a 5 pt plan for getting the girl. pic.twitter.com/5e9I7RSrYO