Sheeran recorded the album in 2004 when he was just 13. The CD was sold by a friend’s brother of some relatives he stayed with while making money busking, the Evening Standard reported. It was reportedly forgotten and found in a drawer. The LP was expected to fetch around $17,300, but swelled up to approximately $85,822 after a fierce bidding war.

“An incredible price! We expected it to sell well but that certainly exceeded our expectations,” said auctioneer Paul Fairweather, per Daily Mail. “It was a fierce battle between four or five very serious bidders and we were blown away with the final price.”

A description of the auction, held by Omega Auctions reads: “A rare promotional CD, self-released in very limited numbers circa 2005 as a demonstration of Ed Sheeran’s recorded material. 14 tracks. The CD bears a handwritten title and credits by Ed Sheeran.” 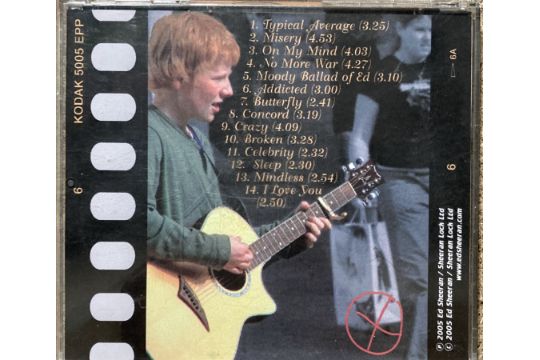 21 copies of the CD are known to exist, with the majority are thought to be owned by Sheeran. He spoke about the demo in his 2014 book Ed Sheeran: A Visual Journey.

“There are probably 20 copies of Spinning Man in existence, and I have 19 of them. I don’t want anyone else to get hold of a copy!” he wrote, according to CNN. “Most of the songs were about a girl called Claire.”

“She was my first love when I was 13. It was a very innocent love, and we only ever held hands, but it lasted a fair amount of time. Then came my first devastating breakup,” Sheeran continued. “Looking back, it really wasn’t that bad, but at the time it was soul-shattering. When she left me, I wrote a lot of songs off the back of it — my first love songs.”

Tracks on the album include “Misery”, “On My Mind” and “Moody Ballad of Ed”.