Bethenny Frankel wants to add to her family.

The “Real Housewives Of New York” alum, 49, reacted to the viral video of 9-year-old Jordan from Oklahoma who is hoping to find his forever family.

People magazine shared Jordan’s heartbreaking story on Instagram over the weekend, revealing the youngster has three wishes: “To have a family, and family, family. Those are the only wishes I have. I would just like to have a family to call mom and dad, or just mom, or just dad.”

In July, 9-year-old Jordan touched the hearts of many when he was interviewed by a local news station and pleaded to have a family after being in foster care for 6 years. When he was asked what he would wish for if he was given three wishes, he said: "To have a family, and family, family. Those are the only wishes I have. I would just like to have a family to call mom and dad, or just mom, or just dad." ❤️ Since his viral interview, Jordan has received over 5,000 adoption submissions and is on his way to finding his forever home. 🎉 Tap the link in bio for the full story. 📷: FOX59 News

In the comment section, Frankel wanted Jordan to be as part of her family. Frankel shares daughter Bryn, 10, with ex-husband Jason Hoppy. The reality star is currently dating Paul Bernon.

“I will adopt him,” she wrote in the comment section of People‘s post, adding, “Bryn said, ‘Momma, you should adopt him.’”

In another comment, Frankel went on to say, “The thing that surprises people is that once they get into the system, it is hard to get them out. Growing up, we always heard that everyone wants a baby and not an older kid. I tried a while back to adopt a 3-year-old and it was a harder process than a newborn. If it’s like other family law systems, it’s not as easy as the movie[s] make it.” 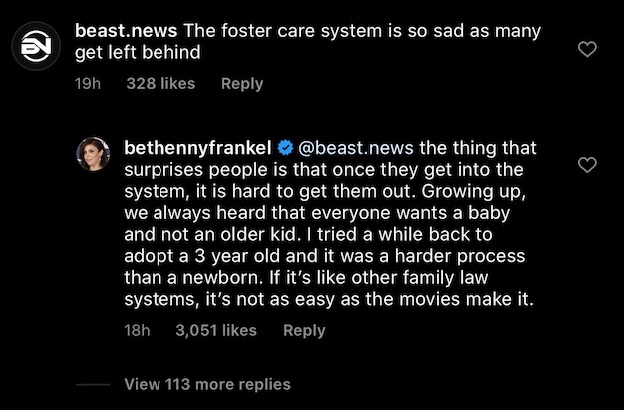 Frankel is still in the middle of a custody battle with Hoppy, which was previously detailed on “RHONY”. Frankel has since left the show.