Kanye West Walks On Water For His Sunday Service

During his Sept. 6 service, West and his gospel choir appeared to walk on water.

The group appeared to be walking on the surface of the lake while birds flew above them as they reached the middle.

The choir performed from the middle of the lake, including “O Fortuna” from Carmina Burana. Joel Osteen also gave a sermon from the water.

“Watching these fine men and women sing, it looks like they are walking on water. My mind goes back to that time where Jesus invited Peter to walk on the water. I can imagine Peter thought ‘Jesus, what are you talking about? That’s impossible! I can’t do that,” Osteen said.

“I think we all have that in times in life where we think ‘God is telling me to do something. I feel it down inside.’ But we don’t feel quantified or have the experience.” 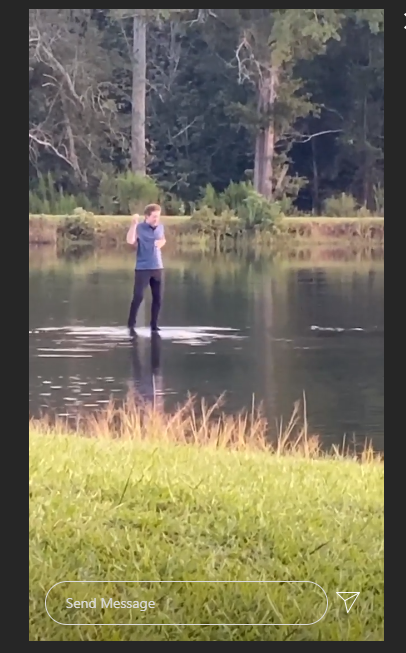 Osteen added, “I can’t sing like them, or I can’t invent like Kanye. That’s for somebody else. But, God doesn’t put a dream in your heart and then not give you the ability to do it. I have learned in life, that you have to choose between your comfort and your calling.”

At one point during the service, West and his two eldest children, North and Saint, joined him on the lake.

West recently suggested that it was God who led him to crash Taylor Swift’s 2009 VMA acceptance speech.

Right now, God is giving me the information,” West told Nick Cannon on his “Cannon Class” podcast. “If God ain’t want me to run on stage and say Beyoncé had the best video, he wouldn’t have sat me in the front row. I would’ve been sitting in the back.”

Adding, “It wouldn’t have made it so ridiculous of an idea because I had never heard of this person [Swift] before, and ‘Single Ladies’ is, like, one of the greatest videos of all time. And I was only drinking Hennessy because I didn’t want to go to the awards show because it was a set-up.”