Kaitlyn Bristowe isn’t letting her injury keep her from giving it her all on “Dancing With the Stars”. The reality star hit the stage for Disney Night, and delivered a magical number.

After a week of rehearsals while struggling with a hurt ankle, Bristowe and her pro partner, Artem Chigvintsev, proved how dedicated they are to her “DWTS” journey. The dynamic duo pulled off a rumba set to the appropriately determined tune “How Far I’ll Go” from Disney’s “Moana”.

“For me, best dance of the night by miles,” judge Carrie Ann Inaba raved. “I was elated watching it. Great job!”

Bruno Tonioli chimed in, adding, “You really reminded me of the shape of water. Breaking waves, a wonderful swell, continuous movement. Total flow. It was wonderful.”

After hearing her critiques, Bristowe gave fans an update on her injury. She revealed her ankle is not broken — an MRI showed she’s suffering from tendonitis and shin splints — but it’s still hurting a lot.

Bristowe and Chigvintsev received a total score of 23/30 for their routine, placing them at the top of the leaderboard once again.

However, when it came time to come out onto the dance floor, she and Chigvintsev impressed the judges with a fabulous Foxtrot set to “I Hope You Dance” by Lee Ann Womack. The pair earned a total score of 22 out of 30 for that performance.

After that night, Bristowe underwent an MRI to see if there was any serious damage, and she took to Instagram over the weekend to share an update with fans.

“Sing it with me. I AM MOANNNNAAA. Not gonna lie. It’s been a tough week. Ankle is still so sore which has really put a damper on rehearsing,” Bristowe wrote. “No MRI results as of this minute, which has been mentally draining too. So we are going to need those votes tomorrow night!!OK? #teamwillyouacceptthisdance #Willyouacceptthisdance #DWTS”

Shortly before Monday’s show kicked off, Bristowe took to her Instagram Story to share a clip of herself getting treatment on her ankle so that she’d be able to perform.

“Moana would still dance on a hurt ankle,” Bristowe wrote on the photo. “So LET’S GOOOOOOOO.” 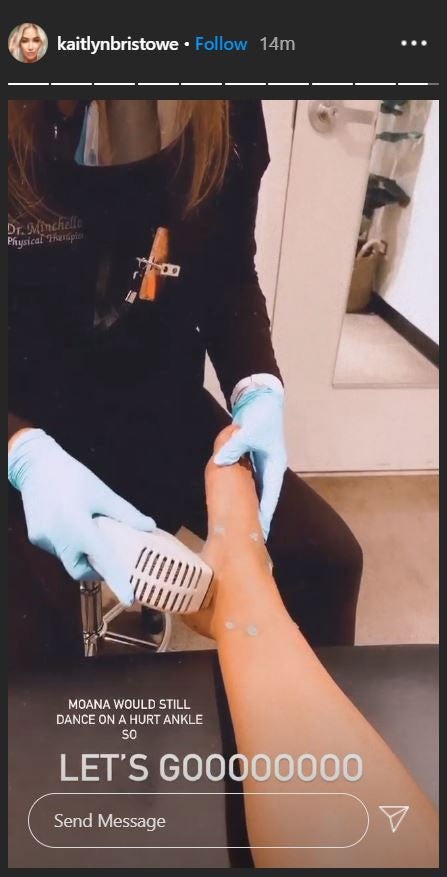 Check out the video below to hear more from Bristowe about her injury, and how it has already impacted her time on “Dancing With the Stars”.