The Duke and Duchess of Cambridge have commended the Australian spirit after fires rampaged through Kangaroo Island earlier this year.

The Duke and Duchess of Cambridge heard from local business owners and first responders from Kangaroo Island 🇦🇺 a small community off the south of Australia, who were impacted by devastating bushfires earlier this year. pic.twitter.com/lYAAwsfEzM

— The Duke and Duchess of Cambridge (@KensingtonRoyal) October 1, 2020

Prince William and Kate Middleton held a video call with local business owners and first responders from the area to hear more about the impact of the wildfires, which struck the island in January.

Over the course of several weeks, the bushfires destroyed residents’ homes and livelihoods, as well as caused the deaths of two people.

During the call, which took place on Friday, Sept 25, William said, “It’s fantastic to hear about the community spirit in Australia as always, which is what Catherine and I see when we come down there. Aussies are very good at looking out for each other and it’s fantastic to see that you’re all pulling together.” 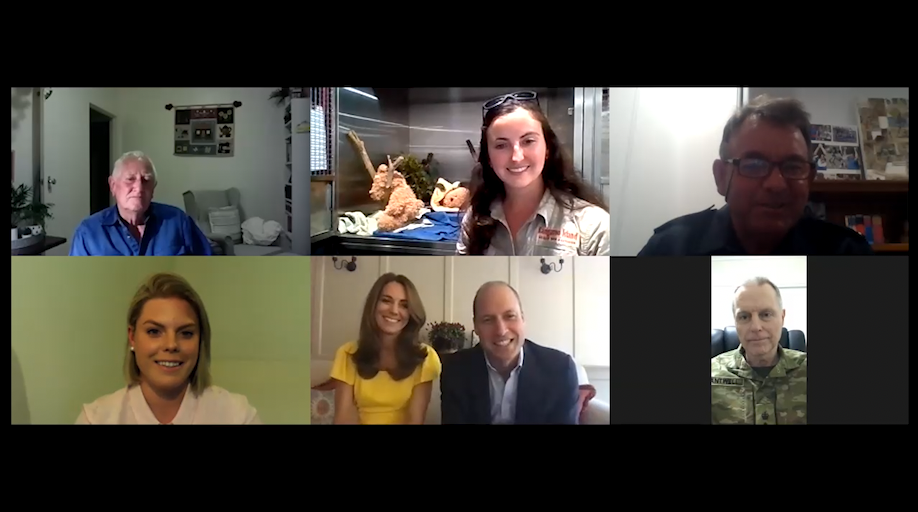 RELATED: The Duke And Duchess Of Cambridge Visit Shire Hall Care Home In South Wales To Play Some Bingo

The wildfires also caused the deaths of thousands of animals on Kangaroo Island, which is one of Australia’s most important wildlife sanctuaries.

Wildlife park owner Dana Mitchell spoke to the royals about how the Island’s animals were affected, including a tiny koala named Grace.

She said, “She came in about a month ago now and she’s gaining weight pretty well and loves her bottle and pretty much just sleeps all the time.”

RELATED: The Duke And Duchess Of Cambridge Send Special Message To Hospital Workers In Canada

William replied, “She looks very well looked after, I have to say. Grace looks like she has a very nice life there.”