Deadline is issuing a rare apology after a story went live on the website claiming that U.S. Vice President Mike had tested positive for COVID-19.

On Thursday, Pence’s team announced he was cancelling a scheduled trip to his home state of Indiana on Friday to vote early.

According to the Indianapolis Star, suspicions were immediately raised that Pence, like President Donald Trump, had tested positive for COVID-19, given that he was in attendance at the so-called “super-spreader” event at the White House last week that has led numerous people who attended to test positive, including presidential adviser Kellyanne Conway and former New Jersey Governor Chris Christie.

However, Pence spokesman Devin O’Malley insisted that Pence and wife Karen had both been tested and determined to be negative on Thursday.

“Nobody’s sick. There’s no positive tests,” said Devin O’Malley. “The VP is planning on travelling on Saturday and Monday. We’ll have more information on the vice president’s schedule next week soon.”

It was likely that speculation that led Deadline to prepare a story that, the news outlet claims, wasn’t intended to be published.

RELATED: Fans Wants Jeff Goldblum To Reprise His Role From ‘The Fly’ For ‘SNL’ Parody On Vice-Presidential Debate

“A draft post of a story about Vice President Mike Pence testing positive for coronavirus that was never meant to publish was accidentally posted on Deadline,” the outlet wrote. “It was pulled down immediately. It never should have been posted and Deadline will take steps to see this kind of thing never happens again. Apologies to the Vice President and our readers. We regret the error.”

Apologies to the Vice President and our readers

However, given the lack of transparency from the White House at the moment, commenters on Twitter remained suspicious, pointing out that Deadline didn’t issue a retraction, but merely apologized for publishing a “draft.”

RELATED: How Celebs Reacted To The Vice Presidential Debate Between Kamala Harris And Mike Pence

A screenshot of the Deadline article was shared on Twitter.

TEXT FROM THE DEADLINE ARTICLE ABOUT PENCE GETTING COVID. NOT SUPPOSED TO BE RELEASED YET pic.twitter.com/jPXmC0eT8d 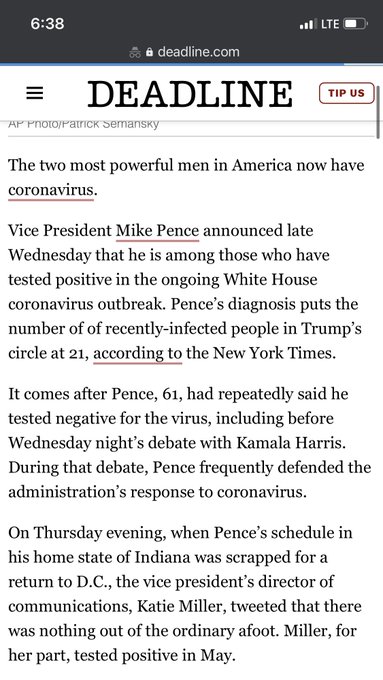 In fact, numerous Twitter users were quick to point out that the pulled story had a surprising amount of detail for a “draft” that would have been awaiting information.

OKAY BUT WAS IT PREP OR IS IT TRUE, PEOPLE

THIS ISN'T A RETRACTION

It seemed very specific and detailed for a “just in case” article, especially in regards to the timeline. It wasn’t the kind of thing they could run a week or two from now without extensive rewrites.

Why was there even a draft story? I used to work at a newspaper. I didn’t write imaginary stories in case they came true. Except for the super bowl… and presidential elections.

“Never meant to publish” does not mean “untrue.” What the hell is going on, people.

I'm sorry but "we never meant to publish this" isn't the same thing as "Pence doesn't have COVID, we wrote this story just in case he did." Weird af.