The Canadian singer politely asked the people who have been waiting outside his apartment, trying to get a glimpse of him, to leave him alone.

“How do you convince yourself it’s not completely inappropriate and disrespectful to wait outside my home to gawk, stare and take pictures as I walk into my apartment,” he wrote on Instagram stories on Wednesday. “This is not a hotel. It’s my home.” 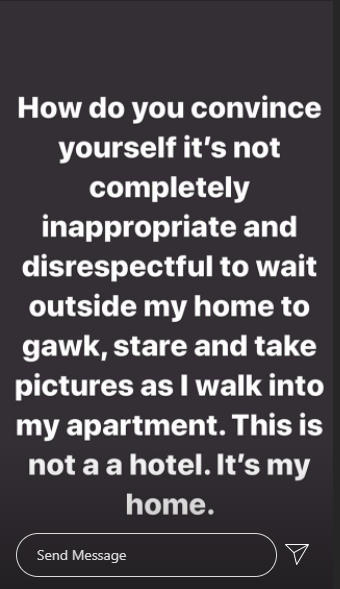 While Bieber was in Los Angeles earlier on Wednesday, it is likely he was talking about his New York apartment as he had to head there for his part as musical guest on Global’s “Saturday Night Live” on Oct. 17.

RELATED: Shawn Mendes Hints At Upcoming Collab With Justin Bieber, Will Neither ‘Confirm Nor Deny’

Bieber and his wife, Hailey, did just purchase a $25 million home in Beverly Park, L.A. He also owns a 101-acre estate in Ontario and was apartment hunting in New York with Hailey in early 2019.

Hailey has previously spoken out about how hard it is to live in the public eye, telling Vogue Italia, “It was difficult for me to understand how to carry on a relationship like this, experienced under the eyes of all.”