Kristin Cavallari got extremely honest during a wine-filled Q&A session with fans on Thursday night.

The reality TV personality and her BFF, Justin Anderson, took to Instagram Live after dinner on U.S. Thanksgiving.

When one fan asked Cavallari to reveal the best kisser from her past high-profile relationships, Cavallari admitted that her “Laguna Beach” costar Stephen Colletti was the clear winner.

The “Very Cavallari” star was then challenged to a game of “F**k, Marry, Kill” with Colletti, Brody Jenner and Justin Bobby.

She answered, “I would marry Stephen, I would f**k Brody and I’d probably kill Justin Bobby. No hard feelings! Probably because I haven’t talked to him since ‘The Hills’.”

When one follower asked “Who would you rather be stuck in a room with, LC [Conrad] or Kelly [Henderson]?” Cavallari avoided replying, instead, taking a big sip from her glass of red wine. 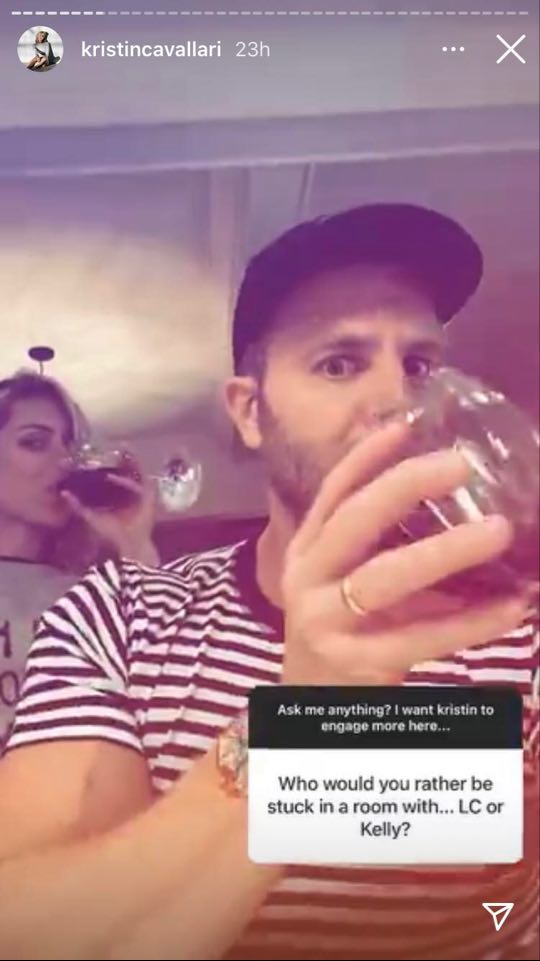 Cavallari and Conrad have been involved in a long-running feud, dating back from when they were teenage stars of “Laguna Beach”.

Meanwhile, Henderson is a former friend of Cavallari’s who was forced to deny rumours of an affair with her estranged husband, Jay Cutler.

Cavallari was later asked to address speculation around a new romance with comedian Jeff Dye.

While she avoided answering the question directly, the 33-year-old said that she was “accepting applications” for men in her life.

She added, “I’m gonna be in trouble tomorrow, I’m sorry. I don’t apologize to anybody. I never have and I never will. I’m not f**king sorry.”