Hilaria Baldwin is opening up about her heritage and cultural background. The fitness expert — who shares five children with husband Alec Baldwin — took to Instagram on Sunday to share two videos responding to critics who have accused her of lying about having Spanish heritage.

Over the weekend, journalist and podcaster Tracie Egan Morrissey took to her Instagram Story to share a multitude of posts examining Hilaria’s alleged claims of her Spanish heritage, and called into question whether or not she has misrepresented her ethnic and cultural background.

The series of posts included clips in which Hilaria appears to speak with a prominent Spanish accent, juxtaposed against clips in which she appears to have no noticeable accent. The posts also delve into both of Hilaria’s parents’ backgrounds, which seem to indicate that both her parents have American ancestry.

Hilaria addressed these claims — as well as allegations made by several people on Twitter who claim to have been friends with her in Boston as a child — and attempted to clear the air with an explanation regarding her childhood and her background.

Hilaria explained that she “grew up speaking two languages” and that she and Alec are “trying to raise [our] kids so that they speak two languages too.”

Regarding the videos in which she appears to have a thicker accent, Hilaria said she speaks both languages, however, “If I’m speaking a lot of Spanish, I tend to mix them… If I start to get nervous or upset, I start to mix the two. And this is something I’ve always been a little insecure about.”

Another point Hilaria addressed was the claim that she was born with the name Hillary, but has changed it to sound more Spanish — a claim Hilaria refutes.

She said she was also clear with her husband about where she was born from the very start of their relationship.

“I’m born in Boston. It was literally the first thing I told my husband. And yeah, I’m a different kind of Bostonian, and that’s who I am,” she said. “You kinda can’t change your background, nor would I want to. I’m really, really proud of who I am and all my different experiences… It might not fit into your cookie cutter or fit into your label, but it’s my weird mix of who I am.”

Addressing those who have claimed she’s lied about her ethnicity, and that she is actually white, Hilaria responded, “Yes, I am a white girl. And let’s be very clear that Europe has a lot of white people in there, and my family is white. Ethnically, I’m a mix of many, many, many things, and culturally, I grew up with the two cultures. It really is simple as that.”

“Ultimately this boils down to this idea where this is a country of a lot of different cultures and I think we can be different parts of ourselves with lots of different people,” she stated.

Shortly after posting her first video, Hilaria took to Instagram yet again to reiterate her explanation, and go point-by-point to clarify and refute the multiple allegations and questions regarding her background.

After defending herself, she announced via her Instagram Stories that she would be going off social media.

“I’ve said my piece. I’m so tired. I’m going to go back to my family, because I’ve been not a very good mommy spending a lot of time focusing on this. I just want to be left alone. I love you and I’m going to sign off for a long time,” she wrote.

Alec then seemingly addressed the controversy. Although he did not name his wife, he asked fans to “consider the source” when evaluating a news story.

“We live in a world where we’re hidden behind the anonymity of social media, and people feel they can say anything,” he said in a video posted on Sunday. “They want to spray it all over you and spit it all over you, their venom and their hate.”

He added, “There are things that have been said lately about people that I love, that I care about deeply, which are just ridiculous.”

“It’s so pathetic that anyone would want to play detective and dig that deep into someone’s life they don’t know anything about, don’t know how they were raised, don’t know who they were actually raised by,” she said in a number of clips posted on her Instagram Stories. “It’s just kind of sad and pathetic. And also, it’s like the holidays, people are depressed, people are going through a lot. I know I’m going through a lot personally. And the last thing we really need to do is start s**t and gossip about something is just so, so stupid. And about someone that nobody even really knows.” 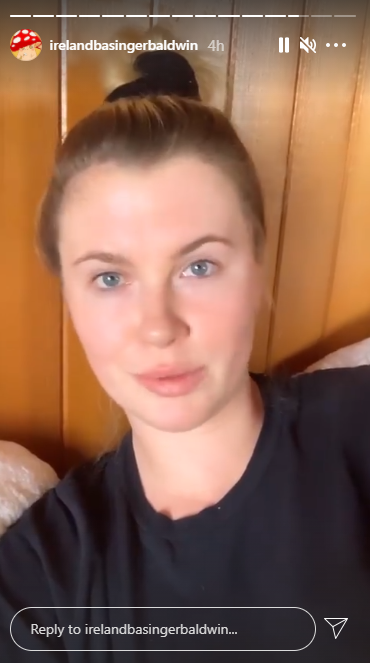 Despite saying she would take a break, Hilaria returned and shared photos of her “evening meditation” with her children, Carmen, 7, Rafael, 5, Leonardo, 4, Romeo 2, and Eduardo, 3 months.

She later shared a selfie, cuddling up to little Eduardo.

For more on Hilaria and Alec’s family, see the video below.

Alec and Hilaria Baldwin Reveal Name of Baby No. 5

Hilaria Baldwin Defends Having a Nanny for Her Four Kids