Following the storming of the U.S. Capitol building in Washington, D.C., Facebook, Twitter and Instagram temporarily suspended the accounts of President Donald Trump due to spreading misinformation and condoning the rioters.

“We love you, you’re very special,” Trump said in a since-deleted video directed at the supporters who invaded the Capitol on Wednesday at his urging.

RELATED: Kevin Hart On U.S. Capitol Protests: ‘If These People Were Black They Would Have All Been Shot Dead’

The official Twitter safety page writes, “We have permanently suspended the account due to the risk of further incitement of violence.”

After close review of recent Tweets from the @realDonaldTrump account and the context around them we have permanently suspended the account due to the risk of further incitement of violence.https://t.co/CBpE1I6j8Y

Trump responded by taking to Twitter to let the world know that he will not be taking his ban from the social media site lying down.

From his POTUS Account, Trump tweeted, “We will not be SILENCED! Twitter is not about FREE SPEECH.”

But Twitter quickly deleted the tweets; within minutes, those tweets had vanished. 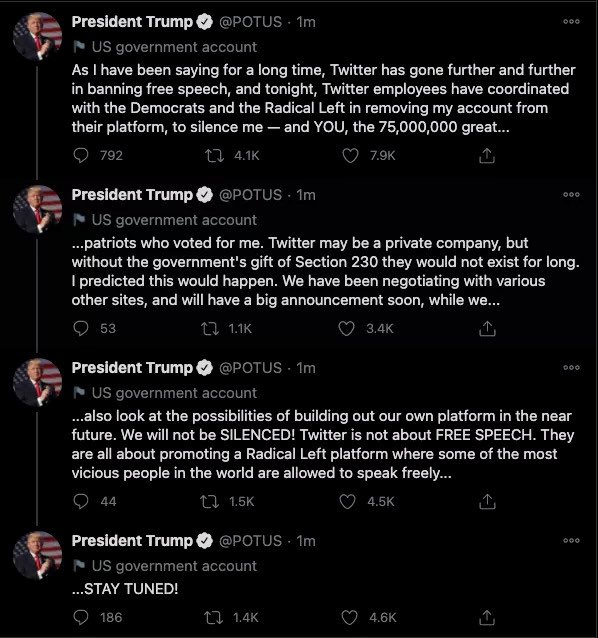 In his announcement, Facebook CEO Mark Zuckerberg shared a lengthy post announcing that the platform has decided to extend Trump’s ban for at least two weeks in order to maintain peace during the transition to Joe Biden’s presidency on Jan. 20.

“Following the certification of the election results by Congress, the priority for the whole country must now be to ensure that the remaining 13 days and the days after inauguration pass peacefully and in accordance with established democratic norms,” Zuckerberg wrote.

He continued, “Over the last several years, we have allowed President Trump to use our platform consistent with our own rules, at times removing content or labeling his posts when they violate our policies. We did this because we believe that the public has a right to the broadest possible access to political speech, even controversial speech. But the current context is now fundamentally different, involving use of our platform to incite violent insurrection against a democratically elected government.”

Finally, Zuckerberg said, “We believe the risks of allowing the President to continue to use our service during this period are simply too great. Therefore, we are extending the block we have placed on his Facebook and Instagram accounts indefinitely and for at least the next two weeks until the peaceful transition of power is complete.”

“Borat” creator Sacha Baron Cohen was among those to praise Twitter for dumping Trump from its platform, declaring the move to be nothing less than “the most important moment in the history of social media.”

He thanked “every Facebook and Twitter employee, user and advocate who fought” to ban “the world’s largest purveyor of lies, conspiracies and hate.”

This is the most important moment in the history of social media.

The world’s largest platforms have banned the world's biggest purveyor of lies, conspiracies and hate.

To every Facebook and Twitter employee, user and advocate who fought for this–the entire world thanks you! pic.twitter.com/jihFaOA39G

Here’s what others have been saying about Trump’s permanent Twitter ban:

Thank you Twitter. You didn’t give us an edit button but you banned trump so for now we’re even

I just want to point out that the White House seems to be mobilizing faster in response to Trump’s Twitter account being removed than they did to the violent insurrection Trump incited at the Capitol on Wednesday.

All we got to do now is get the Nuclear codes out of his hands and we should be good! pic.twitter.com/ANuN7P97eP

it took 4 years for Donald Trump’s Twitter to get banned, it’s about damn time pic.twitter.com/smTdXosJKd

3 things @BarackObama has that @realDonaldTrump doesn’t:

Oh my god they actually did it.