Evan Rachel Wood has shared more information about the abuse she claims to have suffered while dating Marilyn Manson.

Taking to her Instagram stories on Thursday, Wood alleged that Manson was prejudiced against her Jewish heritage.

“I was called a ‘jew’ in a derogatory manner,” she wrote. “He would draw swastikas over my bedside table when he was mad at me.” 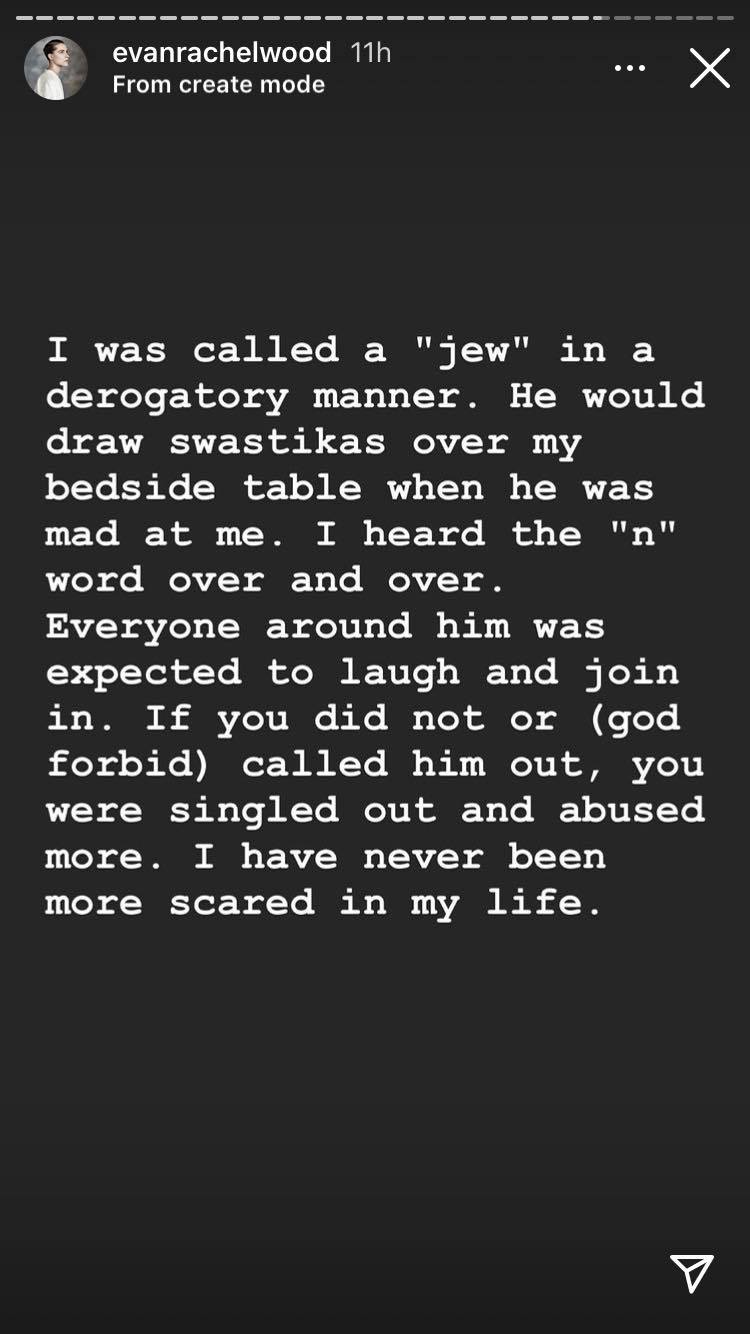 “I heard the ‘n’ word over and over,” she continued. “Everyone around him was expected to laugh and join in. If you did not or (god forbid) called him out, you were singled out and abused more. I have never been more scared in my life.” 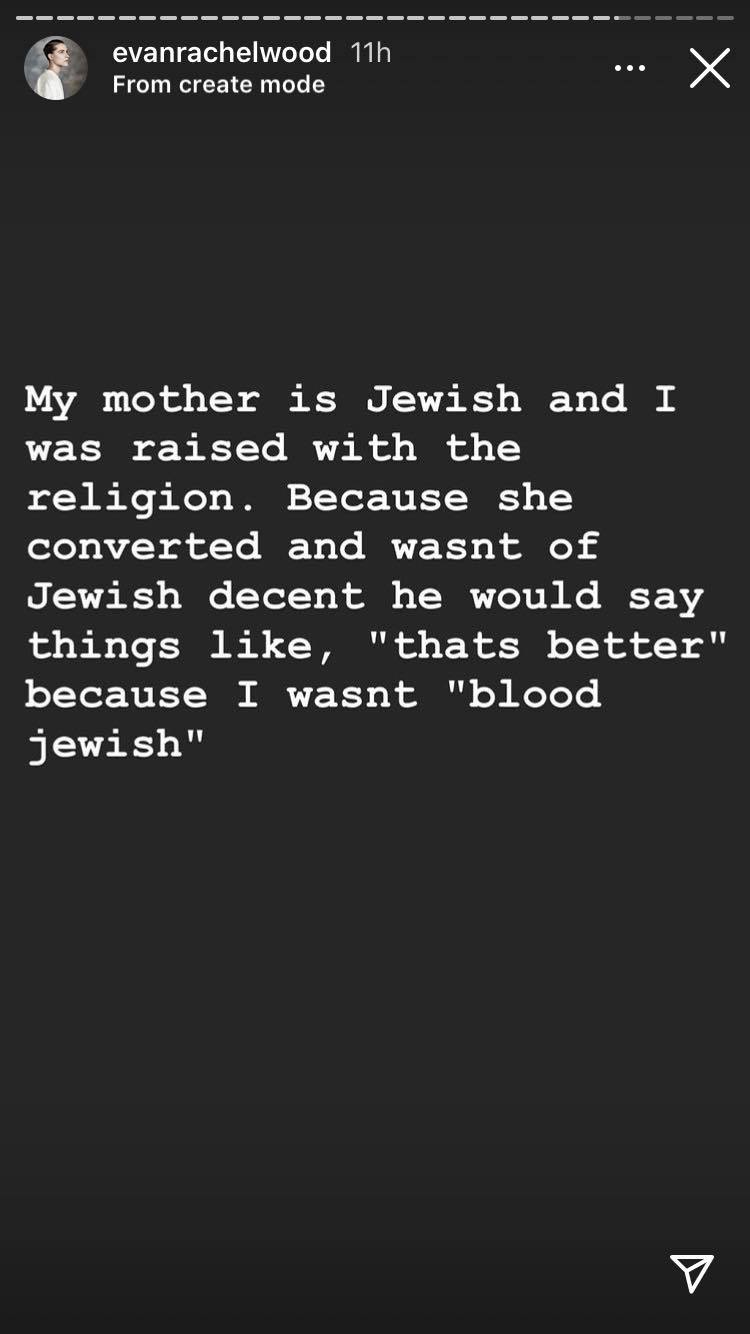 “My mother is Jewish and I was raised with the religion,” Wood wrote in another slide. “Because she converted and wasn’t of Jewish descent he would say things like, ‘that’s better’ because I wasn’t ‘blood Jewish’.”

Wood also told fans that the abuse she suffered was not part of “‘kinky’ sex.”

The “Westworld” actress, 33, had previously spoken out about being abused in a relationship, but hadn’t named names up until last week.

She posted a message on Instagram which read: “The name of my abuser is Brian Warner, also known to the world as Marilyn Manson. He started grooming me when I was a teenager and horrifically abused me for years.

“I was brainwashed and manipulated into submission. I am done living in fear of retaliation, slander, or blackmail. I am here to expose this dangerous man and call out the many industries that have enabled him, before he ruins any more lives.”

She concluded, “I stand with the many victims who will no longer be silent.”

Manson and Wood were thought to have gotten together when she was 19 in 2007, before getting engaged in January 2010. They ended their relationship in August of that year. Manson is 18 years older than Wood.

In a short statement on Instagram, Manson responded to the allegations.

“Obviously, my art and my life have long been magnets for controversy, but these recent claims about me are horrible distortions of reality,” he wrote. “My intimate relationships have always been entirely consensual with like-minded partners. Regardless of how-and why-others are now choosing to misrepresent the past, that is the truth.”

RELATED: Evan Rachel Wood On Her Relationship With Marilyn Manson: ‘I Thought I Was In Love’

Rose McGowan has also chimed in to show her support for Wood.

The “Charmed” actress was engaged to Manson for two years before their relationship ended in 2001.

I stand with Evan Rachel Wood and other brave women who have come forward. It takes years to recover from abuse and I send them strength on their journey to recovery. Let the truth be revealed. Let the healing begin.

“It takes years to recover from abuse and I send them strength on their journey to recovery,” she wrote in a message of solidarity on Twitter. “Let the truth be revealed. Let the healing begin.”

Wood then revealed that an FBI investigation into the allegations against Manson had been requested by California State Senator Susan Rubio, with her sharing a letter on Instagram.

Rubio wrote, “The alleged victims have named Marilyn Manson, also known as Brian Hugh Warner, as the perpetrator. I ask that the U.S. Department of Justice meet with the alleged victims immediately and investigate these accusations.”

“As a domestic violence survivor who now advocates for victims in my role of California state legislator, I share a common trauma of emotional, psychological, and physical control at the hands of an abuser,” she added.

Wood’s comments come after Manson ended an interview with Metal Hammer back in September, when they asked him about testimony Wood gave in front of the California Senate Public Safety Committee back in April 2019.

In the testimony, Wood discussed an abusive relationship she’d been in with a man she’d met in her late teens.

Following Wood’s allegations, Billboard reports that Manson has been dropped by label Loma Vista Records, which has also scrubbed the artist from its website and his records removed from its store.

RELATED: Evan Rachel Wood Reveals Why She Left Twitter: ‘One Of The Best Decisions I Ever Made’

Manson’s rep released a statement regarding the Metal Hammer interview at the time, which included, according to NME, “It is my understanding that Evan Rachel Wood dated multiple people around the time she was dating Manson. Basic Internet research will give you a host of other names that have not come up in any of our discussions.”