Scarlett Johansson is ready to give married life another try! The a-list actress is engaged to beau Romain Dauriac, People Magazine reports.

Scarlett’s rep has confirmed the happy news to ET Canada, adding, “they haven’t chosen a date for the wedding.”;  With a source close to the couple telling People, “they’re engaged and very happy.”;

Romain proposed about a month ago with a vintage Art Deco ring. Scarlett was spotted wearing the diamond at the Venice International Film Festival while promoting her new film Under the Skin. 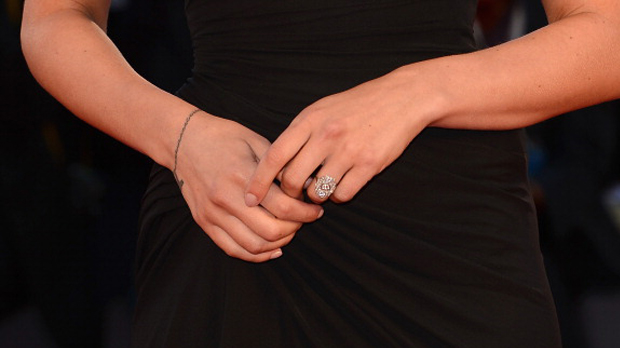 A close up of Scarlett’s ring. Photo by: Pascal Le Segretain

In her new role for the sci-fi film Scarlett reveals her fair share of skin but assures us that it is all done tastefully. “The nudity is written in to the script and I hope the audience agrees that it’s… you know it’s not really indulging, it’s almost like biological in a weird way I think and there is a lot of intention behind it.”;

“And you know I’m not a nudist by nature so of course you feel self conscious about it before hand but it actually allowed me to realize and explore the kind of judgments I had about myself because I had to abandon those and sort of see myself as a sort of blank slate and it was a interesting exercise for sure,”; she adds.

Watch tonight’s ETCanada for more from our Under The Skin interview with Scarlett.