Kristin Cavallari Responds To Reports She Is ‘Shading’ Madison LeCroy, ‘F**k Off’

Kristin Cavallari is responding after being accused of “shading” Madison LeCroy.

On Thursday, Cavallari’s bestie Justin Anderson posted a throwback video of him and the “Very Cavallari” star working out to Jennifer Lopez’s “Let’s Get Loud”.

Some tabloids suggested the choice of song was their way of throwing shade at the “Southern Charm” star who just claimed she had spoken with Lopez’s fiance Alex Rodriguez on the phone numerous times.

RELATED: Kristin Cavallari Responds To Criticisms Of Her Parenting

Responding to the claims she was shading LeCroy, Cavallari told the tabloids to “f**k off”.

“So a friend posts a year old video of us working out and now I’m being accused of throwing SHADE?” Cavallari wrote on Instagram Stories. 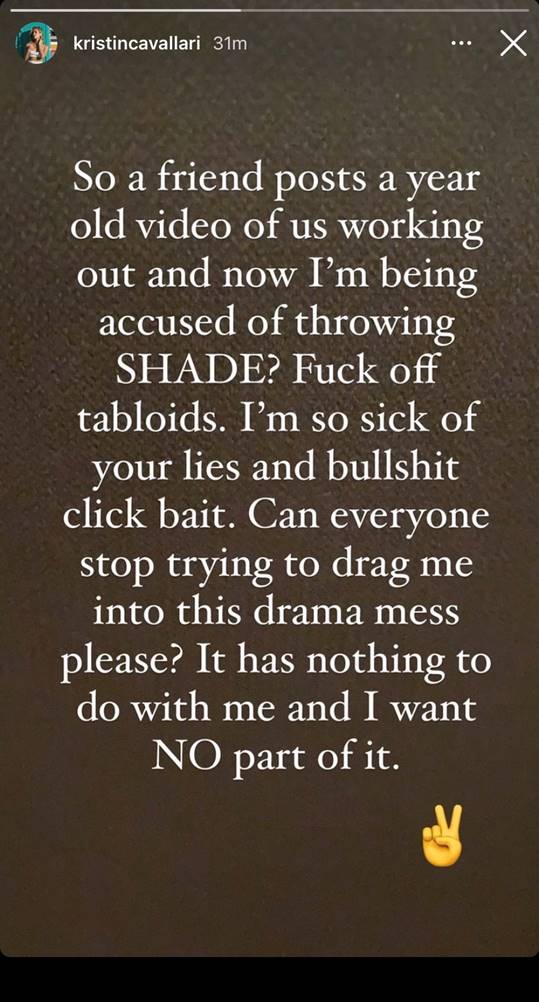 “I’m so sick of your lies and bulls**t click bait,” she added. “Can everyone stop trying to drag me into this drama mess please? It has nothing to do with me and I want NO part of it.”