Hours ahead of Dan Levy’s “Saturday Night Live” debut, his mom took a moment to cherish the moment.

At the “Schitt’s Creek” creator was set to host “SNL”, alongside musical guest Phoebe Bridgers, Levy’s mom, Deborah Divine, took the chance to call out the “bully punks” from Levy’s youth.

“This goes out to the bully punks at Camp WTF who made life miserable for a certain cabin-mate back in the summer of ’96 – just because he was different. Well, after all these years I have just 7 words to say to you: ‘Live from New York, it’s Saturday Night!’ @danjlevy,” she tweeted.

Levy even used his “SNL” appearance as a way to draw attention to the struggles of LBGTQ+ youth.

While the “It Gets Better” skit poked fun at issues such as Kate McKinnon’s battle with an iguana, Levy, along with McKinnon’s fellow queer “SNL” stars Bowen Yang and Punkie Johnson, got the chance to revisit the It Gets Better Project that was launched 10 years ago.

Brian Wenke, Executive Director for the It Gets Better Project, expressed his gratitude for the skit and said he “is honoured to be a part of an organization that continues to maintain relevance 10 years after the viral social media campaign that gave it life.”

Following the episode, the It Gets Better Project released a limited-edition iguana pin, with 100 per cent of proceeds supporting its mission “to uplift, empower, and connect LGBTQ+ youth around the globe.” 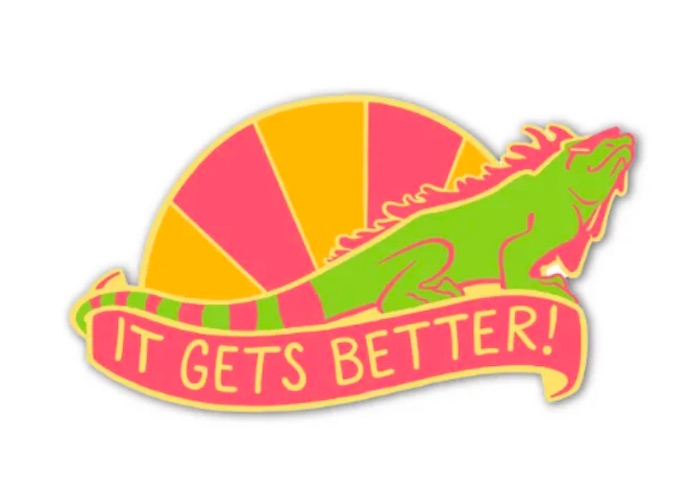 The enamel pin is currently available to pre-order right here.

“While the iguana may have freaked out McKinnon, this adorable pin is the perfect accessory to any outfit, and a hysterical conversation starter,” noted the organization in its announcement.

Meanwhile, Divine also publicly supported her son, who she shares with husband Eugene Levy, during the “Schitt’s Creek” finale.

At the time, she tweeted, “Today I regret every single second of worry back in the uninformed 80’s-wondering how the world was going to treat my brilliant little boy who loved to twirl. Little did I know that he was going to kick that old world’s a** to the curb and create a brand new one.”

Levy later told “The Late Late Show With James Corden” how he “fell apart” and had a “solid cry” after reading Divine’s tweet.

He added, “That’s pretty huge for someone to hear. And I think for her to say that so publicly, I can only assume that it meant so much to a lot of people too, because that’s the power of support and that’s the power of encouragement and acceptance.”