Chris Harrison will be “stepping aside for a period of time” from his role as host of “The Bachelor” and “The Bachelorette” as controversy refuses to die down over comments he made earlier in the week in an interview.

After issuing an apology on Thursday, the “Bachelor”/”Bachelorette” host returned to Instagram on Saturday with a second apology.

In his new apology, Harrison acknowledges that his “ignorance did damage to my friends, colleagues and strangers alike… By excusing historical racism, I defended it. I invoked the term ‘woke police,’ which is unacceptable. I am ashamed over how uninformed I was. I was so wrong.”

He continues, writing, “This historic season of ‘The Bachelor’ should not be marred or overshadowed by my mistakes or diminished by my actions. To that end, I have consulted with Warner Bros. and ABC and will be stepping aside for a period of time and will not join for the ‘After the Final Rose’ special.

Harrison’s full statement can be read below:

“What Chris said was wrong and disappointing,” she wrote on Instagram Stories. “Defending racism can never happen. Accountability comes first, what’s next is learning and growth.” 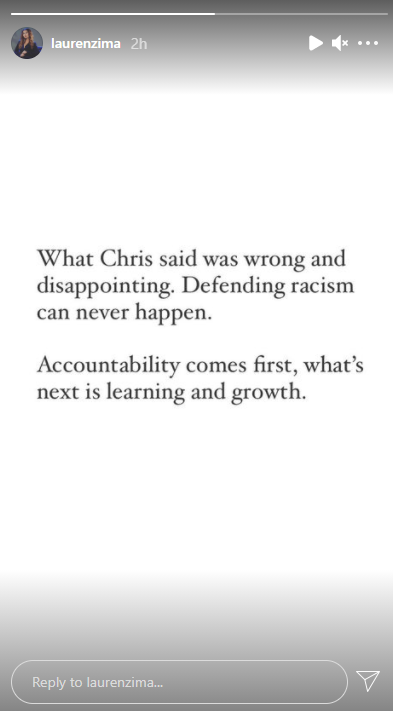